It is an interesting story of how we got introduced to Gopal Farm. One midsummer afternoon the chef called me and said come up to the lobby – that he had a farmer there with some interesting cucumbers. Ashley, one of the farmers, had several varieties of cucumbers we had indeed never seen before. Some were nearly the size of a baseball bat with yellow exteriors, others were long and curvy with few seeds and a pale green slightly fuzzy skin. Gopal Farm specializes in unique Indian heirloom vegetables. Since they had an overwhelming load of squash, gourds, and cucumbers, they were making the rounds the old-fashioned way: going to the top farm-to-table restaurants in New York City to see if any chefs were interested in experimenting with them. Our first purchase was literally straight off their van and into our kitchen. 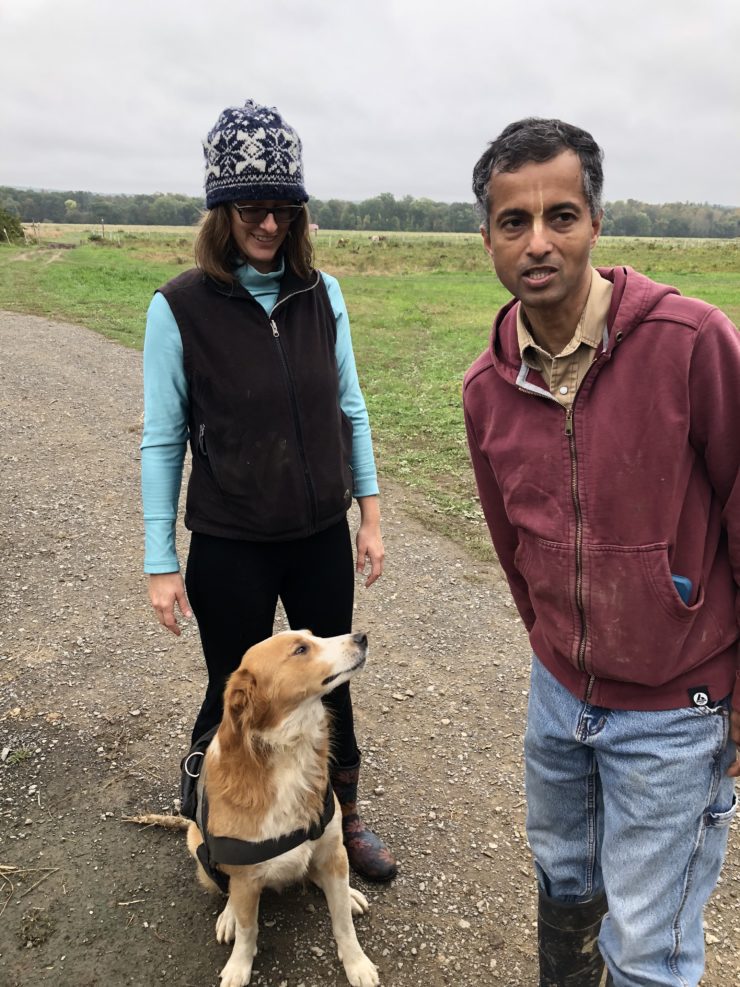 For the rest of the growing season we would get an array of interesting Indian produce:
Each Friday upon their weekly delivery we would find out a new and interesting aspect of their farm. For instance, they are raising dairy cows and making raw milk ghee and buttermilk. They also have Kashmiri goats, chickens, ducks and geese solely for their biodynamic role on the farm eating bugs, compost, etc. Since their farm is no-kill none of them will ever go to slaughter. All of this, along with their entertaining Instagram account posts piqued our interest. 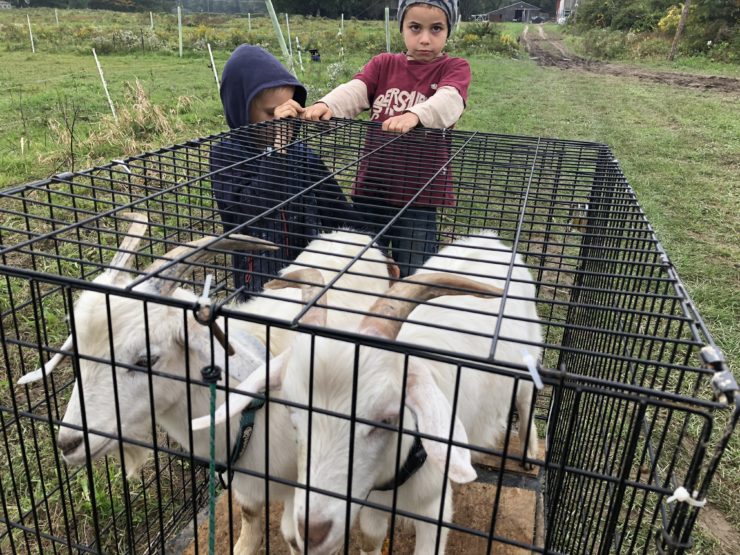 So before the hard winter frost set in we made our way up the western side of the Hudson River to visit their farm in New Paltz. It was a drizzly and grey October afternoon, but Nimai and Ashley welcomed us into their home for a warming lunch made with all the products from their farm. We had an all-vegetarian Indian plate with crispy fried bitter melon, homemade paneer cooked in tomatoes and Malabar spinach, and a decadent dessert made from cooked down raw cow’s milk that tasted like brown butter gone to heaven. Then we headed out to the fields to see the various heirloom gourds they grew for the first time this year, all from heirloom seeds they brought back from India. Then we saw and harvested from the bitter melon plot, purple carrot rows and Malabar spinach field still going strong through the colder elements. 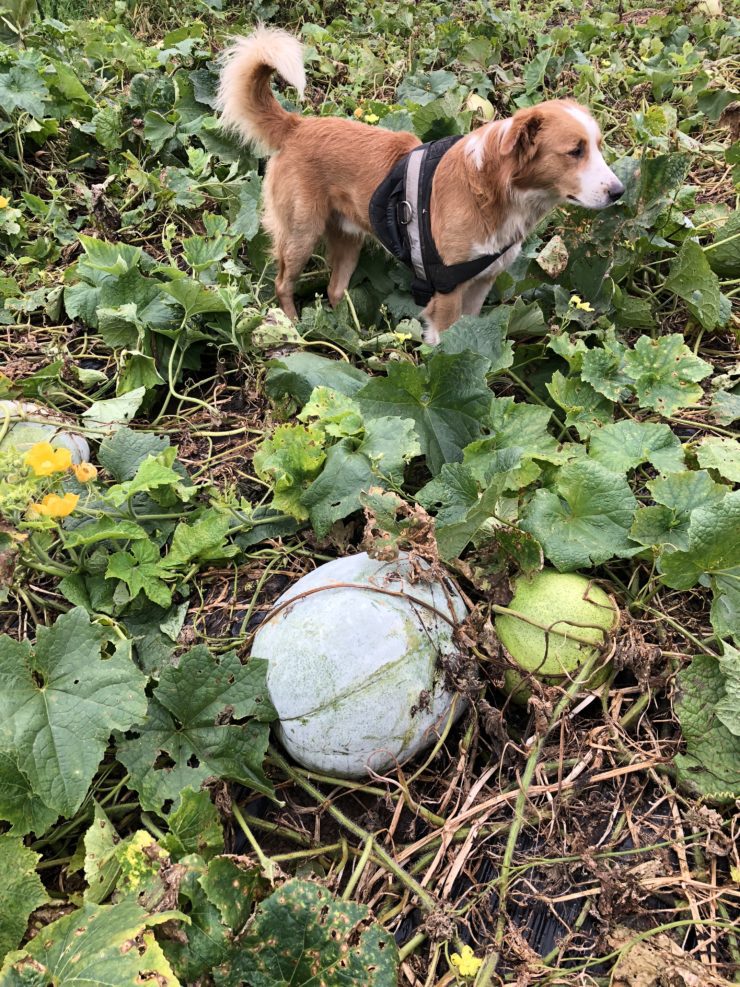 Next, we made our way to the highlight of the farm, the cows, all of them are Jersey breed, ideal for producing the rich milk they need for their ghee and buttermilk. They are looking to receive a grant to expand their dairy production in the coming years and be able to sell their specialty ghee, made from buttermilk, with probiotics. We also got to comb the cows, which is good for their coats, keeping the flies off of them, and general farmer and animal bonding. Unlike more industrial dairy operations where cows are bred to milk for a 4-5 year period at an intensive rate, Gopal Farm’s cows will live up to 10-15 years. They have a great respect for the biodynamic benefits the cows and all the animals on their farm contribute, such as weed consumption, insect and pest removal, and most important nutrients for the compost and soil. As we departed we were able to get some of the precious raw cow’s milk, with a nearly three-inch high cream line in the jar. This was some of the most flavorful and freshest milk we had ever tasted from a farm. We look forward to seeing what Gopal Farms will do next season – there is the talk of adding a small on-farm cafe, expanding the ghee production and trying some new heirloom produce varieties. Until they show up with their van next season we will eagerly await. 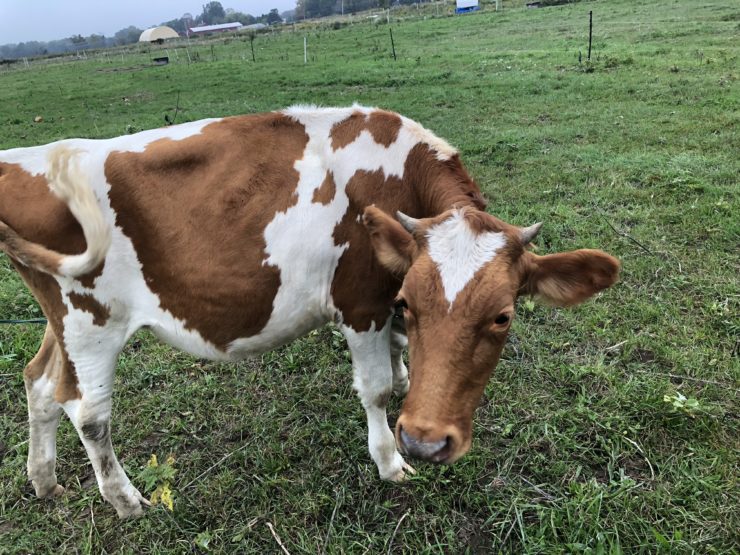 ← Jono Pandolfi Studio
The Return of the Men Singing Carols →