Nearly four years ago, I went on one of my first farm trips to Lani’s Farm in Bordentown. I knew it would be an interesting farm to visit because of their diverse range of produce available at the market. Every week – even in the bleak late winter and early spring – they would have a new ingredient from their greenhouse, like fresh ginger shoots, mung bean sprouts, edible flowers, or stone crops. Years later their stand and farm continue to thrill chefs and home cooks alike with their stunning variety and impeccable quality. Since my first visit they have expanded their property by over a hundred acres and doubled their green houses so there was a lot more to see and learn about this time around. 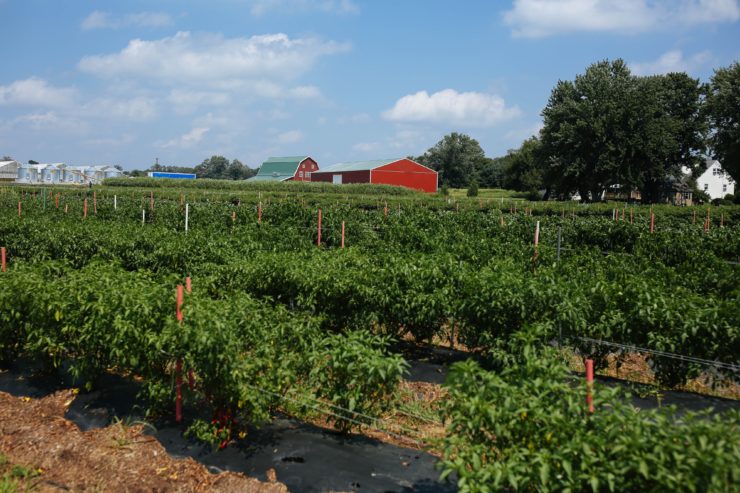 Chef Charles and I hopped on the NJ turnpike and were at Lani’s Farm in just over an hour. We felt worlds away from the city amongst the vast open fields and rolling hills. We also felt very hot, since the heat index was near 100 degrees that August afternoon. Tenzig, also known as “Chimi” the exuberant market manager, greeted us under a shady market tent with ice cold fresh pressed juices that the farm makes as one of it’s value-added products. Fresh tart blackberry and tomato beet juice were refreshing and rejuvenating.

The first unique herb we tasted was also of the mouth-numbing variety. Sancho peppercorns grow on several large shrubs around the property. We were using the leaves of the plant with strawberries on a dessert earlier in the summer but tasting the peppercorn was an intense experience, fruity with a mouth-numbing tingle, all from one tiny green peppercorn!

Then we proceeded to walk through one of the 20 greenhouses. This one was warm and humid for growing ginger, trellised Japanese cucumbers, and seedlings. Being in there for a few minutes actually made the outside temperature seem refreshing! 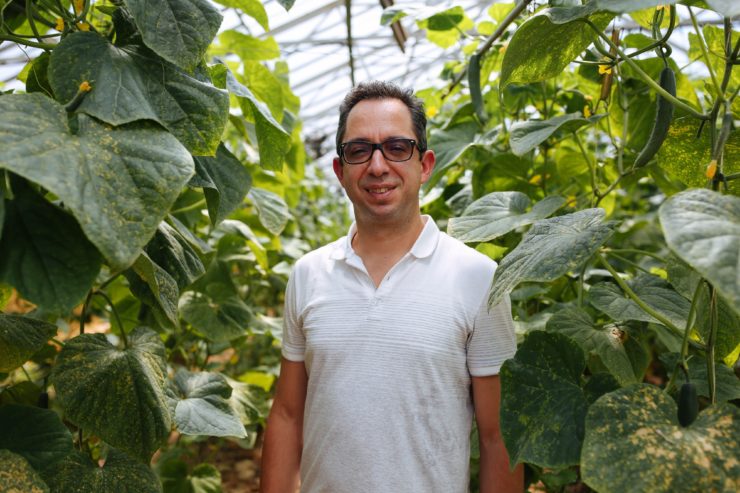 We hopped on a large ATV and Chimi drove us out into the fields. Along the way we harvested produce for our lunch and learned about Lani’s Farm’s various organic growing methods, beginning with peppers (mostly shishito and korean peppers that they sell at the market while green for their medium spice level). Then we learned about the later harvested red peppers they dry for making into pepper powder for their kimchi. He also explained that herbs like Thai basil and mint are planted along side the rows as an organic insect repellent. 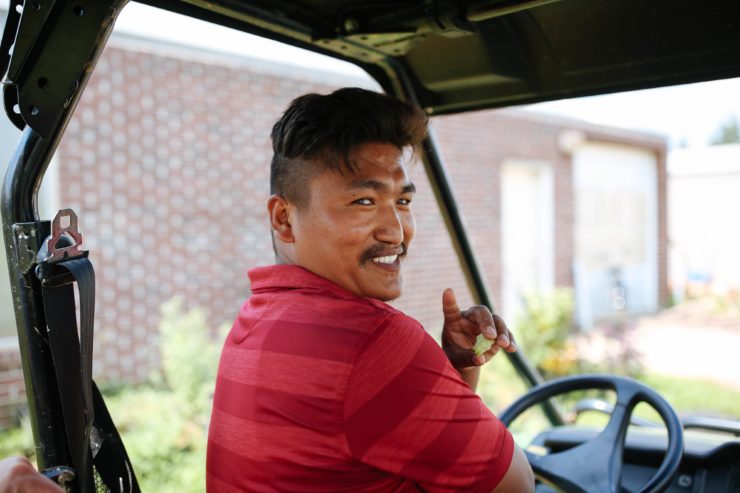 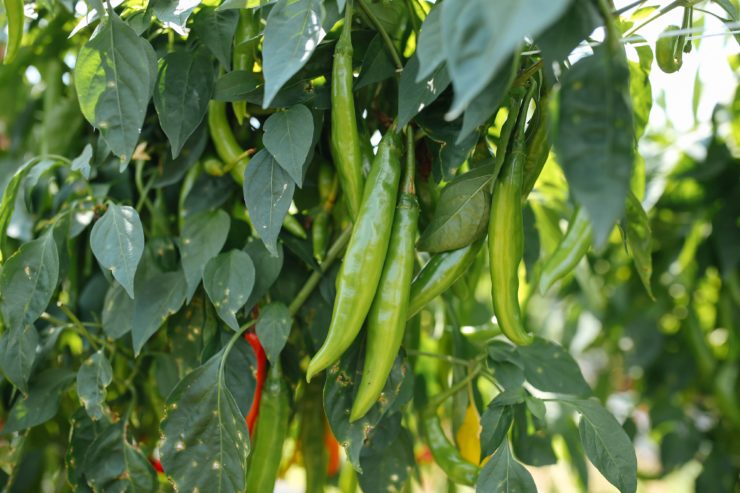 Next we entered what was the hottest hoop house, where the turmeric grows. It had to be over 120 degrees with an abrasive smack of humidity, but as you can see the turmeric thrives in those conditions. They bring not only the roots to sell at their stand but also the leaves, which can be used for wrapping around fish or grilled meats. 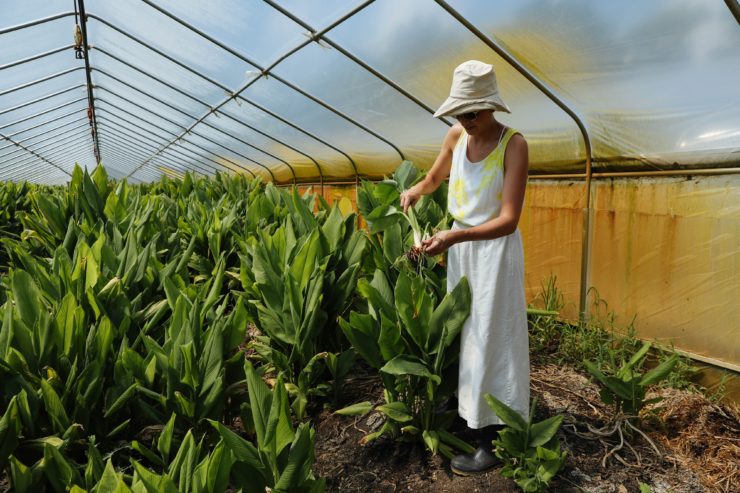 Next stop on the tour was to the only orchard trees on the farm, to pick (and munch on) some deliciously sweet and crunchy asian pears. 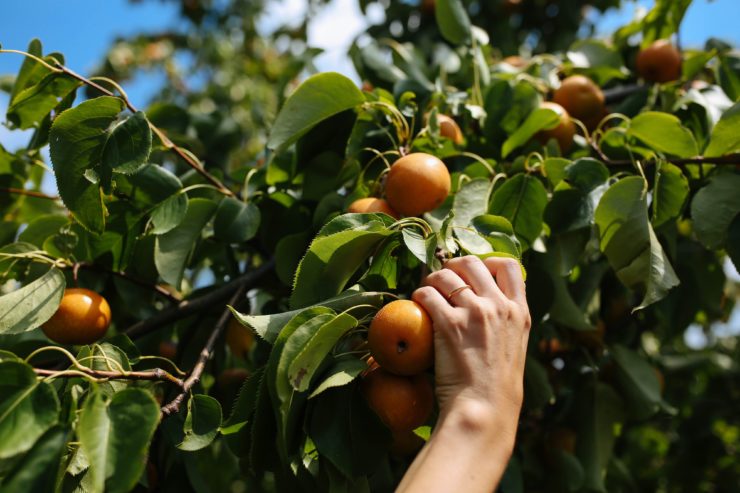 The compost fields were our next attraction, vast mountains of the stuff was cooking all around us. Chimi told us that the county brings downed trees and brush to them to add as the brown component. A local stable provides manure and then all the compost the farm and kitchen generates make up this foundation of the healthy organic soil. Maintaining the piles is a daily task and a large tractor has to turn over the large piles each morning.

Then we headed across the road to the new fields to see where the rest of the vegetable scraps are composted by the chickens. With all the peppers they were munching on there were bound to be some spicy eggs! 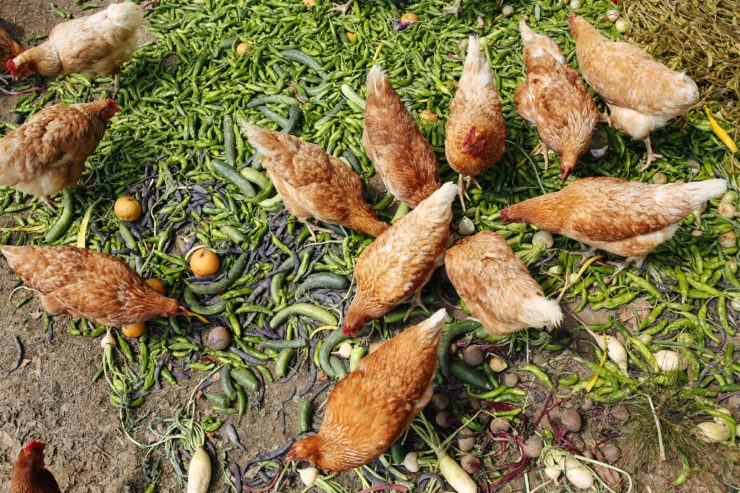 One of the most interesting aspects about the tour was learning about the innovative and environmentally conscious methods for storing produce at Lani’s Farm. They had dug a large hole and submerged an old shipping container inside and mounded it with dirt to act as cold storage for all their Japanese sweet potatoes. A special greenhouse with dry and hot conditions was set up with wire racks for dehydrating surplus crops like beans, peppers, etc. 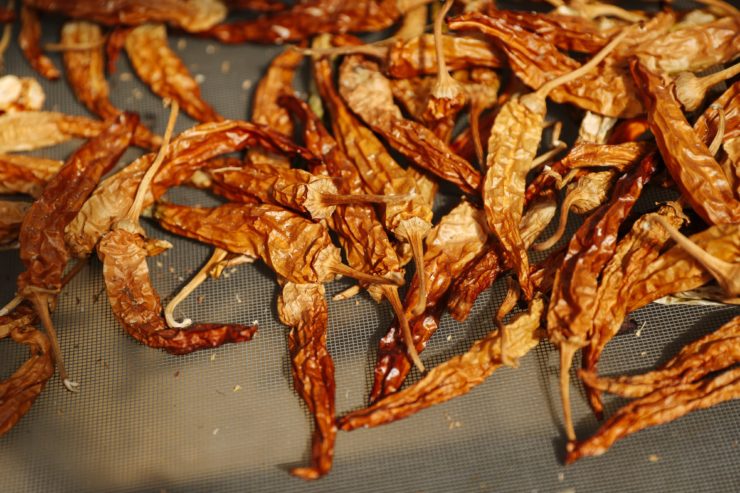 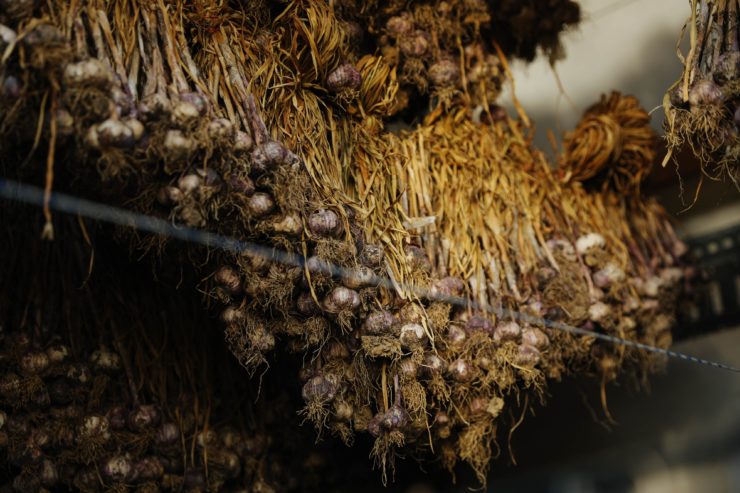 Chimi pointed out the granary vessels filled with soy beans, corn and rye. Currently they sell most of it as organic animal feed but they hope to also start milling some of their own flour and making the soy beans into organic miso paste and farm-fermented soy sauce. 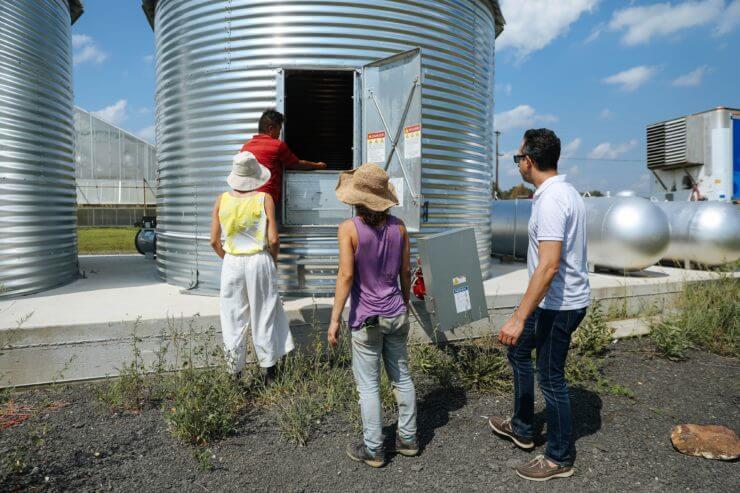 We brought back our harvested bounty to the grill and fired up an outdoor picnic lunch. 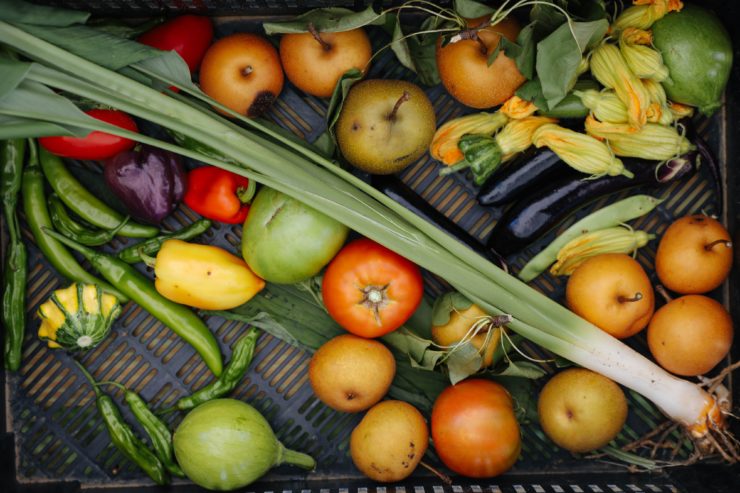 Our rather impromptu menu: 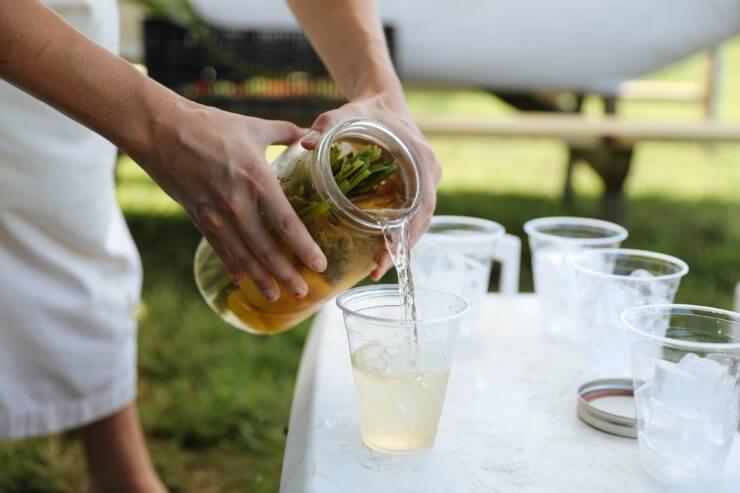 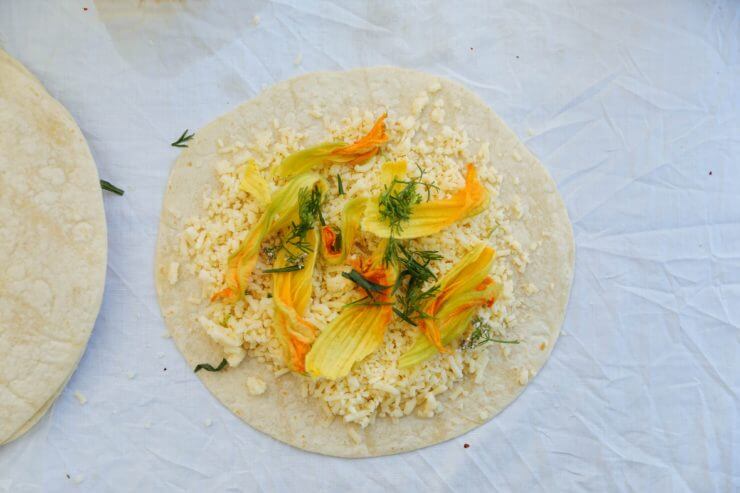 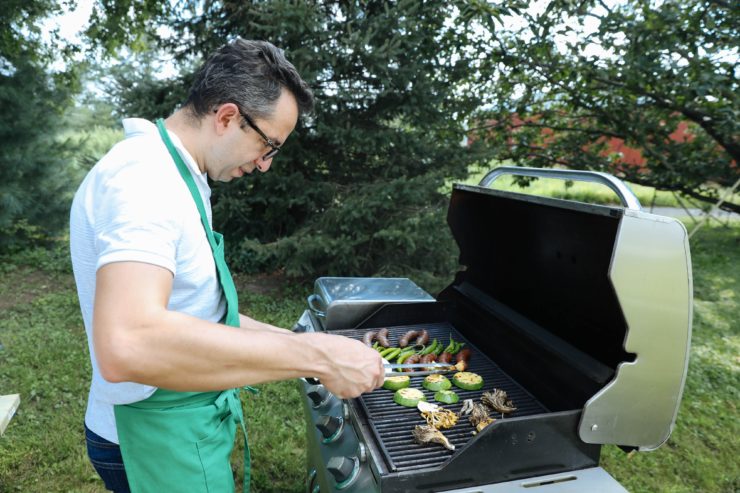 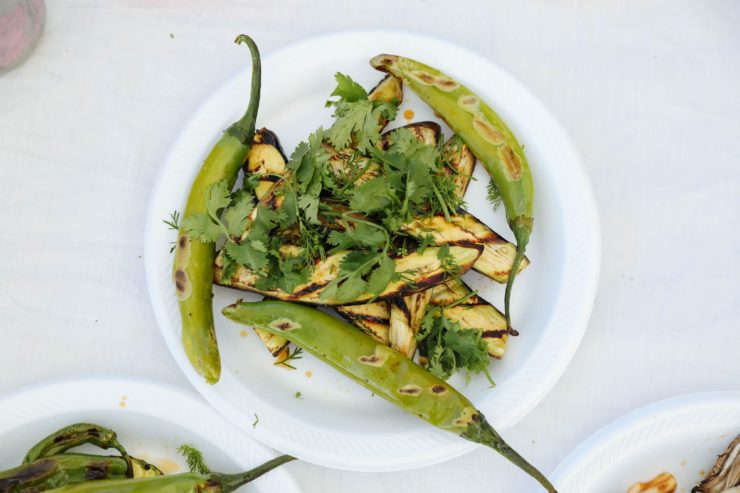 As we cooked and enjoyed the late summer harvest we got to chat a bit more with Steve, the farm’s owner, about more of his future projects and ambitions for the farm. He wants to add a permanent event space for when restaurants come to visit and for people to host events. He also purchased a neighboring property that was previously a petting zoo, where he wants to start raising his own livestock. It looks like we will have to come back in a few more years to see all these other projects in action. All in all, it is inspiring to see what started out as a small family organic produce farm expand and grow into so many other areas such as value-added products and livestock production. We will be looking forward to all that is in store for visit #3 to Lani’s Farm! 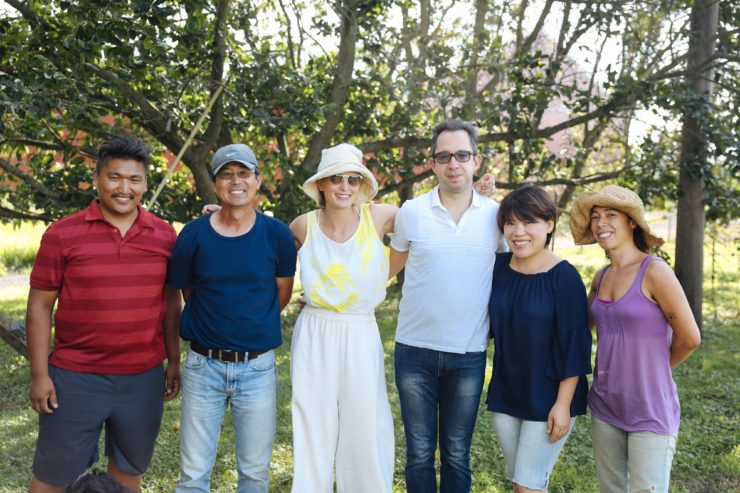