We were thrilled to attend and sponsor the Change Food Fest once again this year. The theme of this year’s conference was “Growing the Good Food Movement,” and through the various speakers we learned more about companies and organizations big and small expanding good food on a local and global level. 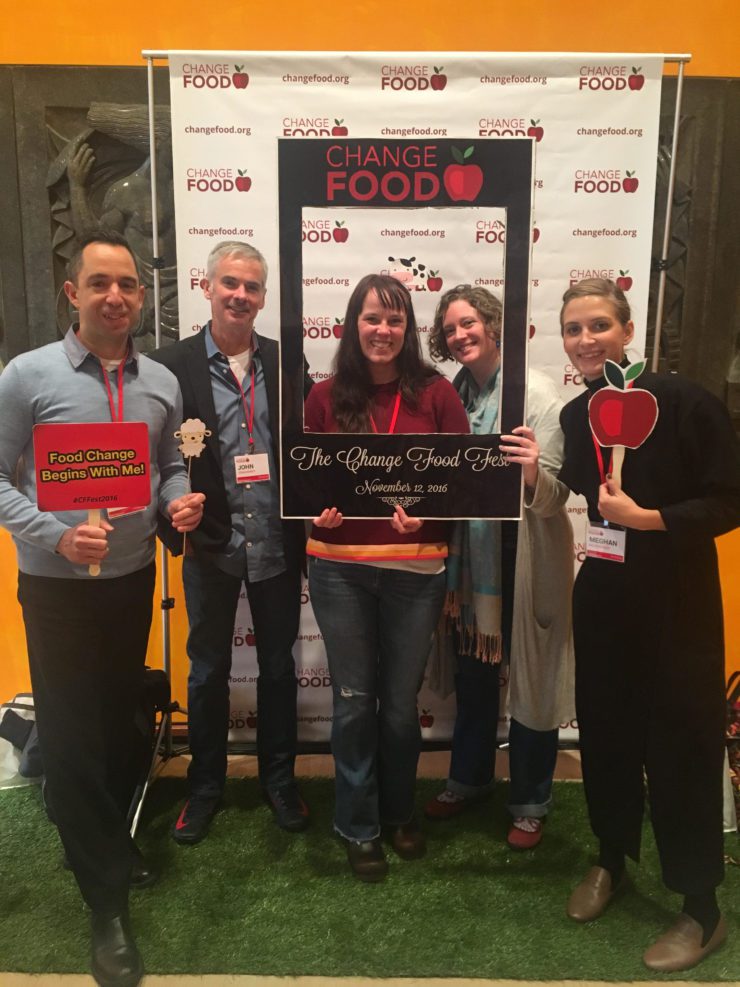 The first session was specifically devoted to the “Changing Business of Food” and how the ways consumers eat, dine, and shop are changing. Erica Orange from The Future Hunters described the new playing field for many forward thinking companies is no longer “green” but “blue,” meaning we not only preserve instead of deplete the environment but we positively put something back in. For example, Saltwater Brewery in Florida makes their six pack rings out of compostable material that can also serve as bird feed and can dissolve into the ocean. Then we got some interesting consumer behavior insights from Kim Huskey of Google and how they are pushing vegetable-forward “menus of change” in all of their cafeterias, and are analyzing how to make healthy choices appealing and tempting. Furthermore they are sharing their insights with other industry leaders and educational organizations so that these concepts can proliferate through the entire food system.

After a lovely banh mi lunch, we headed into the second session for “Businesses Doing it Right” to take a look at entrepreneurs in the food system focused on safe, healthy, delicious food. Sophia Mendelsohn of JetBlue shared some insights from the airline industry about trying to find a balance between offering customers what they actually want and what they say they want on surveys. It was found people said they wanted healthy options, but often people choose the sodas and higher calorie snacks that they actually crave. Nonetheless JetBlue has struck a balance, offering Blue Chips instead of potato chips, fresh vegetable snacks for purchase, and even composting all their food waste. They also partner with smaller sustainable food startups to bring their products to a larger customer base, like Blue Marble Ice Cream. Most impressively at JFK they have a rooftop garden and outdoor space in their terminal.

Another insightful business concept was detailed by Sam Polk of Everytable. After seeing the disparity of healthy food options between wealthy areas of Los Angeles and poorer neighborhoods, he knew he wanted to find a way to serve healthy and flavorful takeaway meals to the disadvantaged at an affordable price. So he decided to come up with a low cost structure model where instead of having a kitchen at each location all the food would be made in a commissary central kitchen. The storefronts are then smaller and have lower rent. Also he came up with a pricing model that evened out the playing field. In those higher income areas of Los Angeles he sells his meals at $8 per bowl and in lower income areas he sells them for half the price, in order to truly compete with the cheap fast food options that abound.

We wrapped up the day with some of the most inspirational speakers in the session “Real Change, Right Now.” Through a history of the invention of Hot Chicken in Nashville, Tennessee, Loren Cardeli of A Growing Culture, gave a plea for more investors to work with people of all races and ethnic backgrounds. Tessa Edick described the critical work she is doing with FarmOn! in upstate NY to get young people back into farming and prepared to run profitable businesses. The most heartwarming was Tony Hillery’s story of how he started Harlem Grown as an after school garden program in one plot in Harlem which has now grown to 6 locations. He reminded us that many of these children don’t go to schools with any extracurricular programs and many don’t even have basic classes like art or gym. In many cases, the garden was the one space they had to be creative, to interact with nature, and to learn more about food and health. All in all, we left eager to work with many of these local organizations as part of PRINT’s efforts to support the good food movement in NYC and in the region.

Even though the recent election and political state of our country had given the conference a less jubilant mood than years past, many of the speakers asked for us to have hope and keep up the work we are doing, no matter what the political situation may bring and continue to change food and grow the movement.

You can watch all the talks online at changefood.org