When we heard the famed California forager Connie Green was coming across the coast to lead a mushroom foraging excursion, we were thrilled. We had hosted her at PRINT seven years ago to help promote her book, The Wild Table, whose straightforward recipes for foraged ingredients are still a part of our kitchen’s repertoire today, like Wild Spring Vegetable Fritto Misto, Fiddlehead Ferns with Mussels, and Bacon Wrapped Chanterelles.

The event was held at Tama Matsuoka’s property in New Jersey, where we have made several foraging farm trips in the past. To top it off Agern restaurant had partnered up to serve a foraged lunch with the seasonal wild edibles. 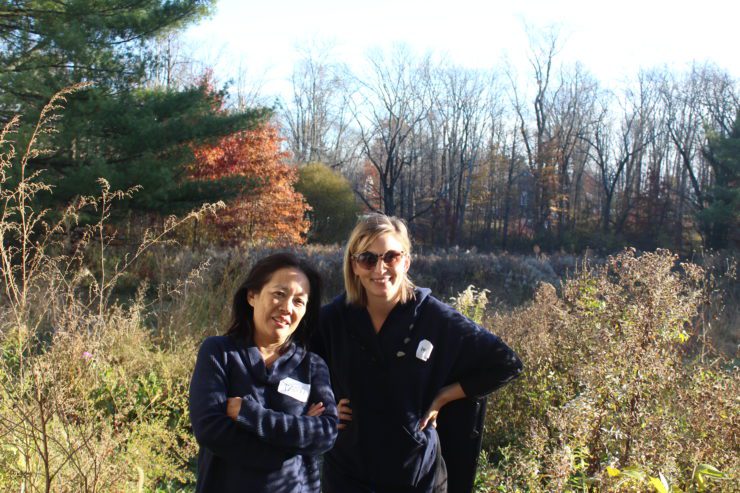 We broke off into groups and headed straight into the woods, and after only walking a few yards we came across our first mushroom, the oyster, on one of the many decaying tree logs that fell down in Tama’s wood’s during Hurricane Sandy. We learned that even with the death of a tree there then springs to life various mushrooms which arrive to help in the decaying process. The oyster mushrooms were pristine and white and we learned how to cut them off the log so that a portion still remains attached and more mushrooms will grow back. This is also one type of mushroom that is easy to cultivate, so you can keep the caps and stuff them into holes in a log and you will start growing mushrooms continuously. 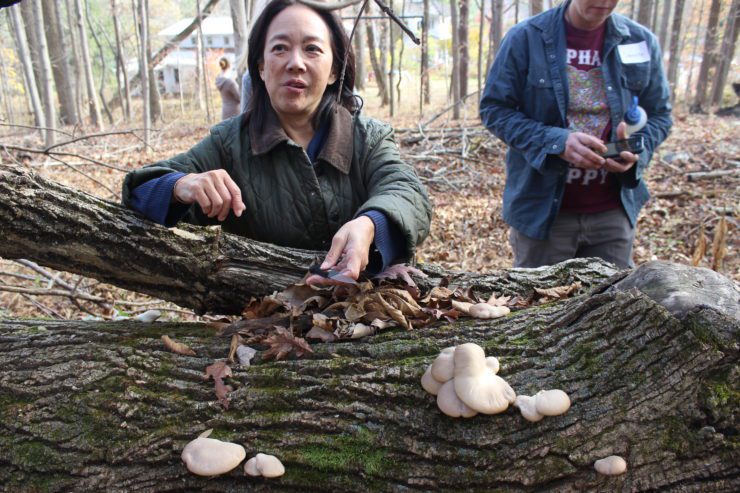 Connie then showed us the stinkiest mushroom of the day, the Sulfur Shelf mushroom also known as Chicken of the Woods, that has a distinct yellow color and strong sulfur smell that can be detected yards away. They are known to grow very fast and are good composters. 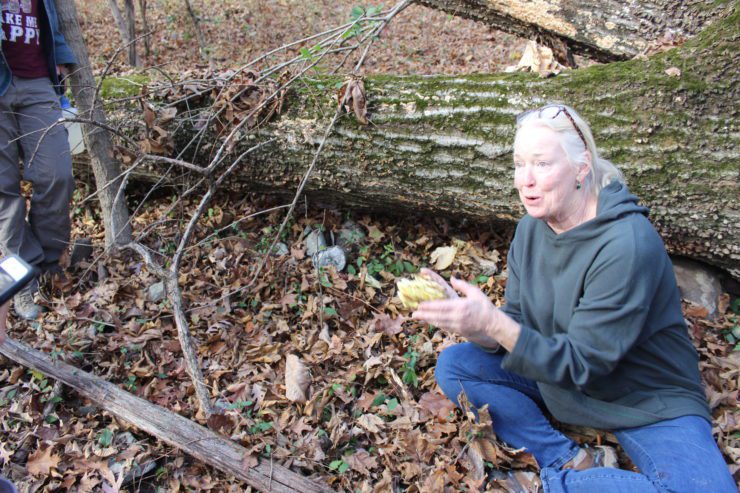 Then we came across a very common mushroom species that you can always find in the woods, even in winter, the Turkey Tail. That is because these can stay growing on trees for up to three years. They are sometimes more colorful with variation in colors and stripes, hence the name. Although not usually edible since they are tougher and drier in texture, Connie says they can still have a great flavor and can be chewed on while walking through the woods or boiled into a flavorful mushroom tea. 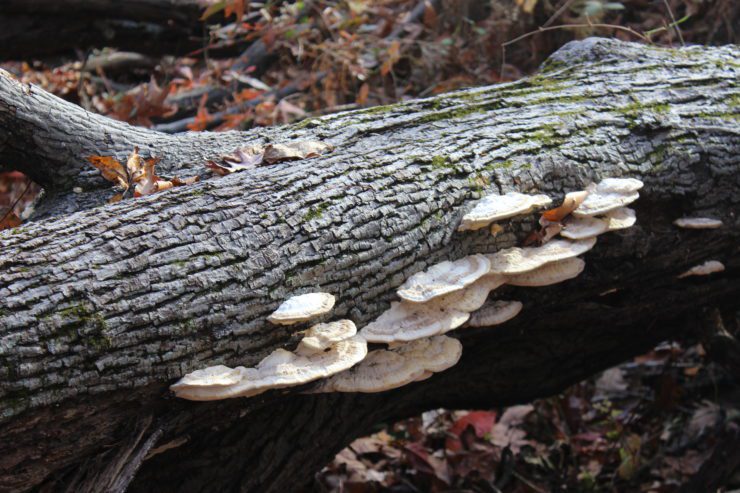 When we saw an explosion of reddish brown dust rising from a tree log we weren’t sure what was going on, but Connie had simply stomped on some dried out Puffball mushrooms, which release their spores with any contact or pressure from the forest surrounding them. Even a rain drop will release the spores and help spread the mushroom throughout the forest floor. 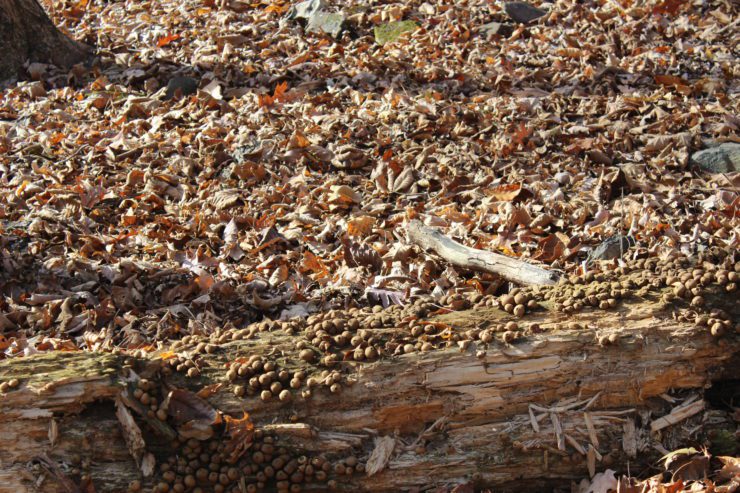 Last, but luckily not least, we came upon one of the most flavorful of the mushrooms of the day, the Maitake, which along with great taste also have powerful health benefits for the immune system. I gathered up a large one and tore off pieces for each member of our group to take home. 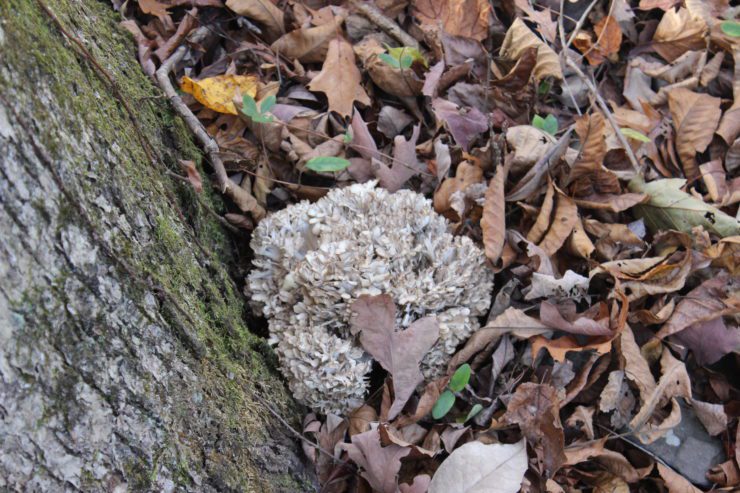 We wrapped up the with a foraged lunch on the porch in the afternoon sunlight. A radicchio salad with black walnuts followed by wheat berry porridge with hen of the woods mushrooms and fire roasted pork loin. 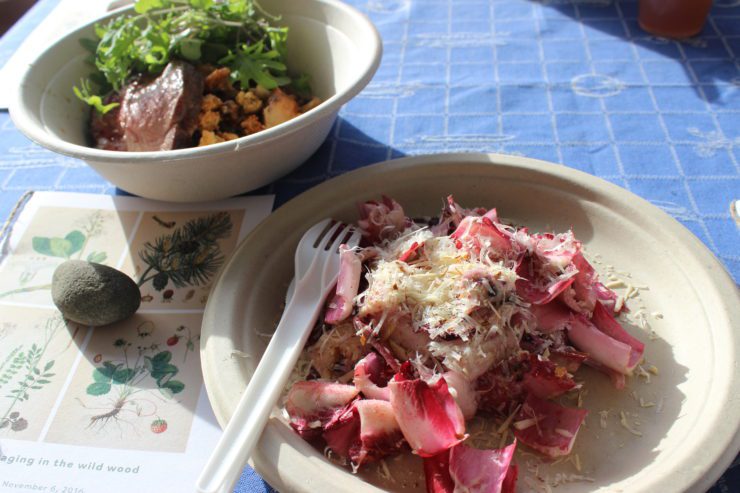 Before getting back on the road we snatched a few group shots and then drove through the early sunset, daylight savings had begun, we were glad we had enjoyed the last of the late fall foraging bounty. 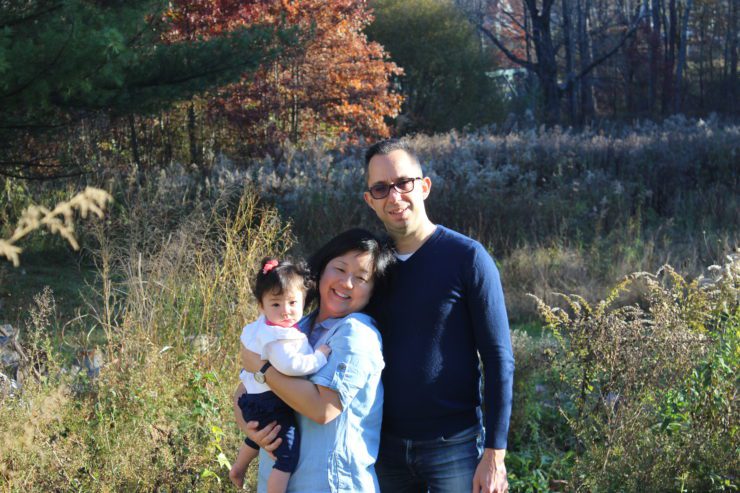