We decided to take two staff trips out to Long Island to visit vineyards we work with during the pivotal time of harvest. For our first trip with PRINT staff we headed to Shinn Estate, a biodynamic vineyard on the North Fork. 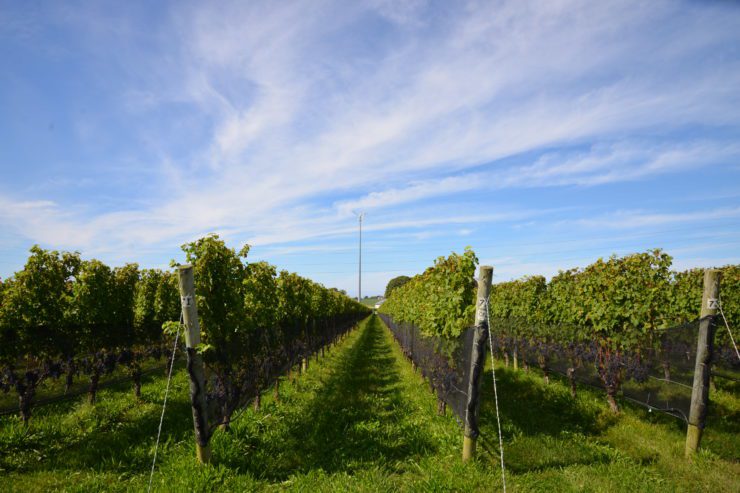 We arrived on an unseasonably hot and humid late September afternoon (after a quick pit stop at the Briermere Farm Stand to pick up one of their famous pies). 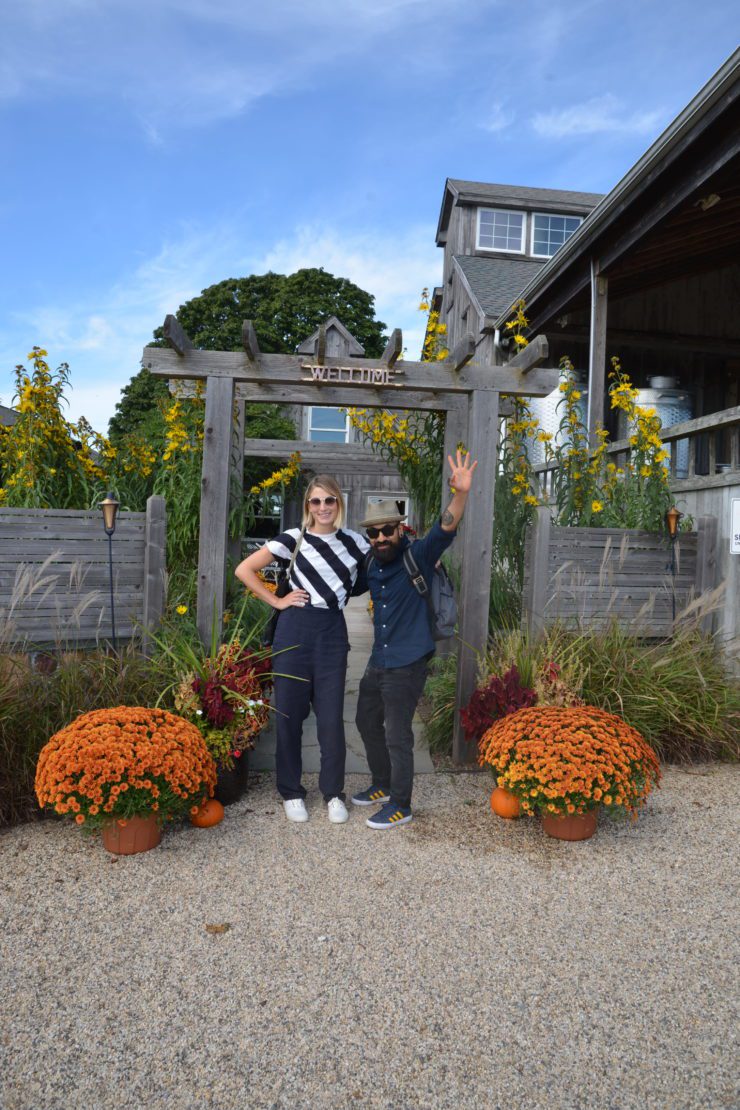 The vineyard manager, Tom Ward and the winemaker, Patrick Caserta, walked us through the rows of grapes. Along the way they pointed out the bee hives that help promote the biodiversity in the vineyard by pollinating over 20 native plants that run underneath the rows. They also had us taste several grape varieties from the vines to test for ripeness. It was interesting to note the characteristics of the wines in the whole grapes. For instance the malbec and petit verdot had more tannin in the skin than the cab franc or merlot. Even though the cab franc we tried tasted juicy and sweet, they said the brix they wanted it to achieve would take several more weeks of hanging on the vine. 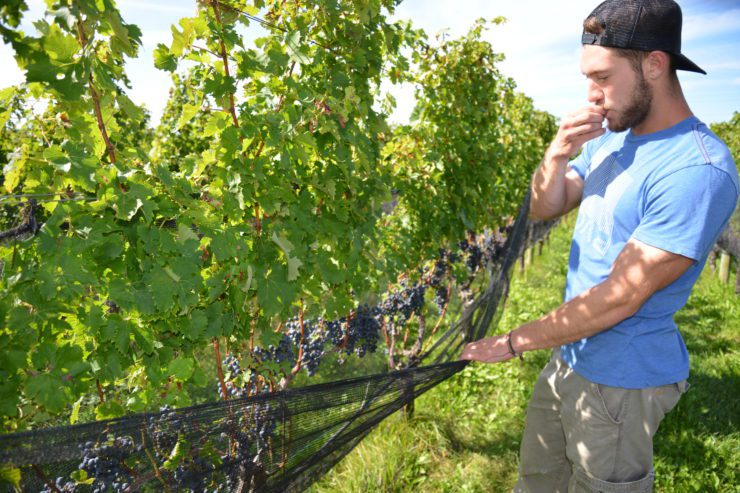 When we got near the pinot blanc clusters they explained that although it produces one of their favorite wines, it was one of the more finicky grapes to maintain. That is because the clusters are very tight and some of the grapes will get over ripe at this time of year. If it begins to rot it will spread to the entire cluster. Therefore each day the vineyard manager and his crew have to go through by hand to remove any overripe specimens. All the maintenance of the vines is done by hand throughout the 20 acres and is very labor intensive. 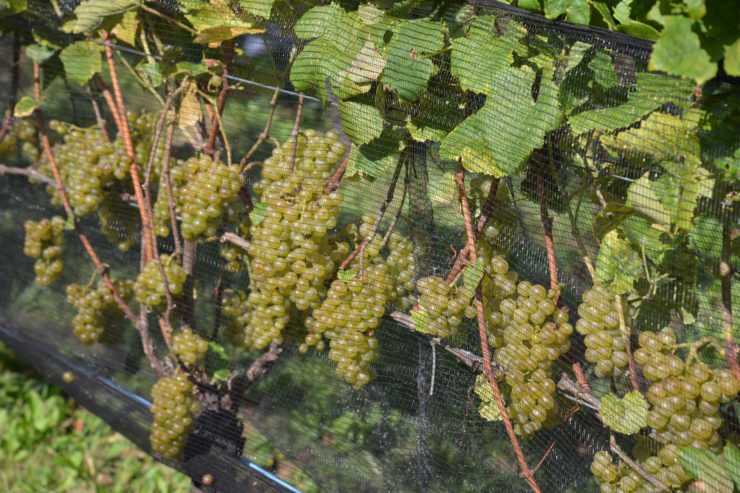 Although it was the beginning of the winemaking season, there was nothing in the press the day we visited. On the adjacent vineyard they were beginning to harvest the thirty-year-old Chardonnay and Sauvignon Blanc vines which due to their location are some of the first to ripen. Patrick then showed us the barrel room and his new ceramic amphora vessel which he was going to use for the first time this year for aging some of the older vine Chardonnay. He also pointed out two large puncheon barrels which hold the precious juice from those stubborn pinot blanc grapes. He leaves a bit of space in the top of the barrel so that a natural flora forms and the wine takes on a slight oxidized quality. The result is a rich white with aromatic floral qualities, as we tasted. 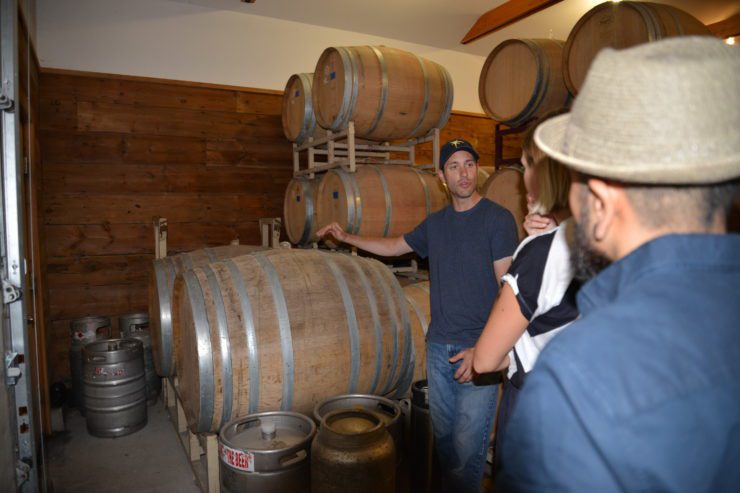 After a tasting of several more wines we left feeling as though we had learned what qualities make up a Shinn Estate wine: dynamic flavors from the natural and diverse ecosystem in the vineyard, the terroir of the sandy loam and cool ocean breezes, and the integrity of all the hard work and labor that goes into each step from tending the vines to harvesting to pressing that comes through in each glass. We are proud to serve such incredible local wines at our restaurant and share this unique terroir with our guests. 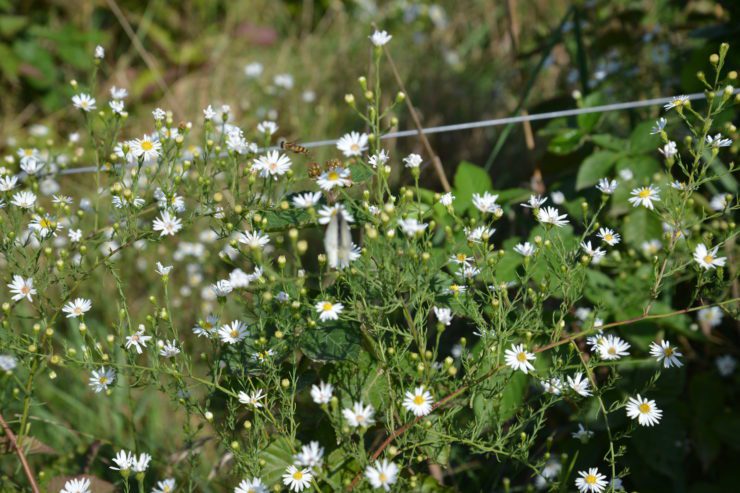 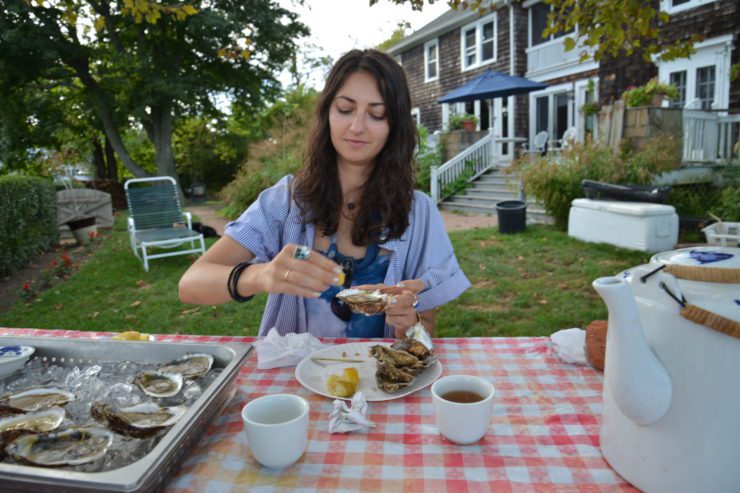 We headed further east on the fork to the outskirts of Greenport to visit a small family-run oyster operation called Widow’s Hole. The couple who runs it, Michael and Isabel Osinski, who also have their home on the property, harvest approximately 6,000 oysters a week. They ship them all over the country and have a cult following amongst many chefs, such as Thomas Keller of the French Laundry. 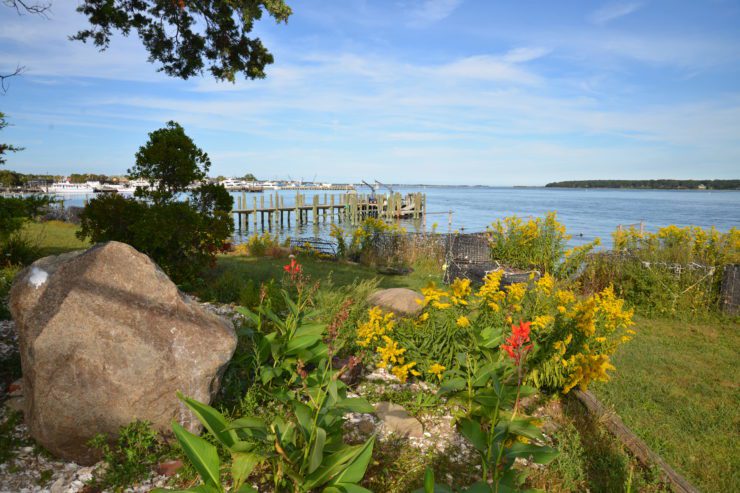 Michael led us on a tour along with his sidekick. 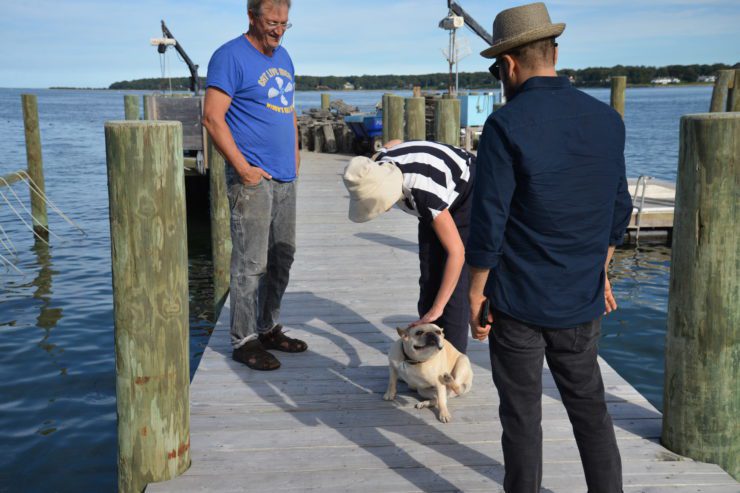 He described the history of oyster farming in the area when it had been a booming industry. He said that back in the 1920s the entire bay was full of oyster farms and that train cars would fill up with tons of oysters to bring into the city each day where they were sold by open air street vendors. I asked him what he thought led to the decline of the oyster industry on Long Island, and he blames several factors: first the public health scares with raw seafood that led to shutting down of oyster street vendors and the rise in factory-farmed cheap meat which took over as main protein source for home cooks. 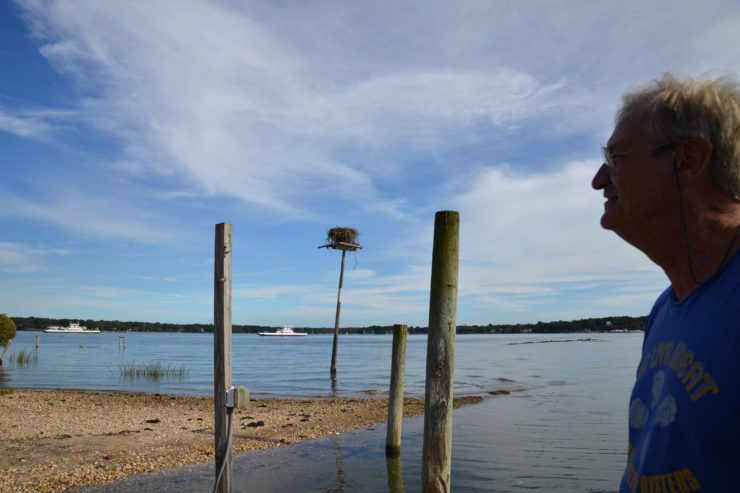 When he and his wife bought the property in 1999, they started farming oysters as a side hobby but it quickly turned into a full fledged business. They have traveled extensively in France to learn about various oyster farming techniques and to obtain speciality equipment. He explained to us about the life cycle of an oyster, which he says correlates with Christmas and Easter. Beginning in March they purchase baby oysters from a hatchery and raise them for several months in a large tank. When they are large enough they are put out into the harbor to live out their life span. It will take another year and a half for them to get to marketable size, approximately 2 years total growth. He also has some three-year-old oysters, called “knife and fork” that are larger in size but perfect for roasting or making into rockefeller. The oysters fall more or less dormant in the dead of winter, between January and March, and the waters become too cold for them to harvest. They do all the harvest by hand and since the water is shallow. they usually wade out, so you can see why they take a break in the coldest months. 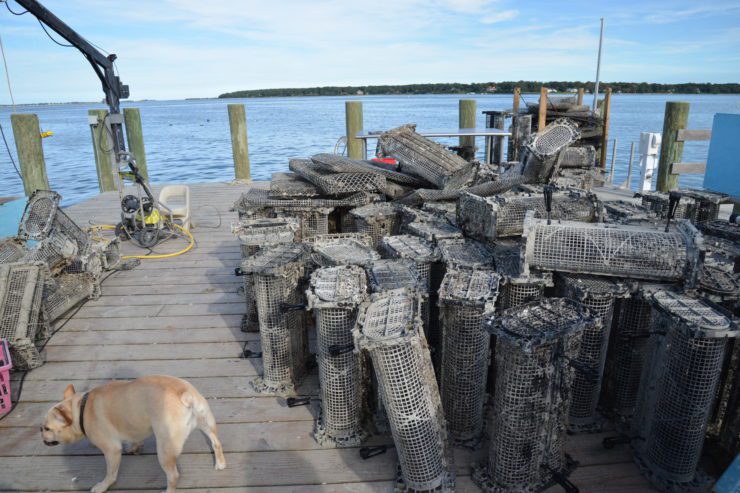 He then showed us the oyster’s namesake, the Widow’s Hole itself which is small inlet off the harbor. Then finally we got to taste some for ourselves. We sat on a picnic table overlooking the harbor, with boats passing by, and a sea breeze coming through. It could not have been more idyllic. The flavor of the oysters is intensely briny with an almost umami back bone. We are happy to say that now we will be sharing these unique small production oysters with our guests at the restaurant, so now they too can taste for themselves a bit of the North Fork and Long Island Oyster history! 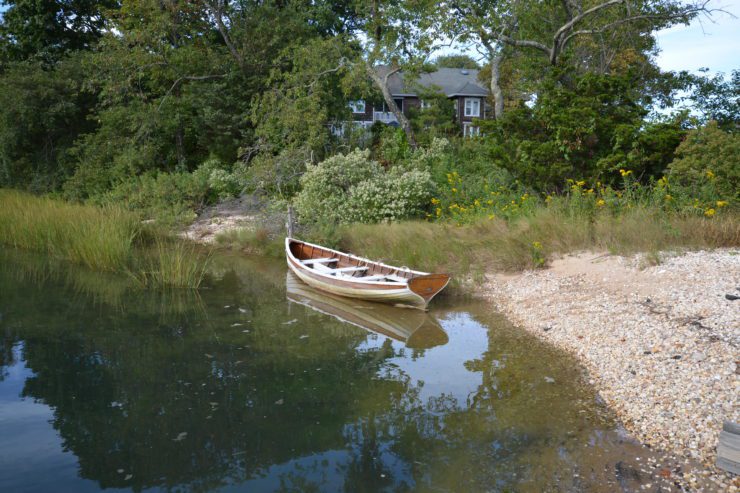 We ended the day with a picnic on a nearby beach and watched the sunset over the sound! A picturesque ending to a perfect field trip! 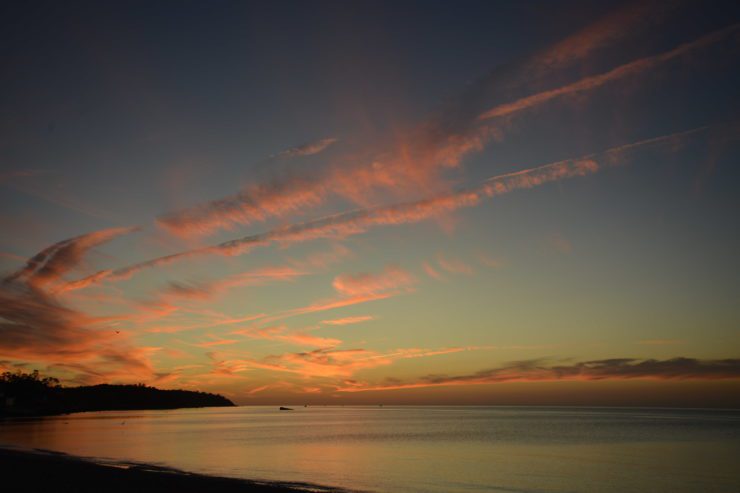 Thank you to Kathleen Kuhn, a dedicated PRINT server, for capturing the day with her camera. Check out more of her photos follow her on instagram or check out her blog.