It’s cherry season! Cherries are actually part of the rose family, along with other stone fruits like peaches, plums, nectarines, and apricots (also almonds). Even though cherries are seen as a very American fruit they have roots in antiquity. The Romans first discovered the small fleshy fruits in Asia Minor around 70 BC — and  the name cherry comes from the Turkish town of Cerasus. The Romans then introduced cherries to Britain in the first century AD and they came to North America with English colonists in the 1600s. There are more than 1,000 varieties of cherries in the United States, but the two kinds that are most commonly eaten are the sweet cherry Prunus avium and the sour cherry Prunus Cerasus. Sour cherries and Bing cherries can range from bright, vibrant red to nearly black-purple. Rainier cherries — a cultivar of cherry developed in 1952 at Washington State University and named after Mount Rainier — are prettily blush tinged golden white. Cherry season is pretty short, and we are making as much us of them as we can in the PRINT. kitchen and also at the bar. We are getting our cherries from some great orchards in our region — Locust Grove in NY and Toigo Orchards in PA. We are taking the sour cherries and brandying them for the bar. Sour cherries are also the star of our new dessert: Cherry Pie with Lattice Crust & Sour Cream Ice Cream. Sweet cherries are being used as a stuffing ingredient for the quail. 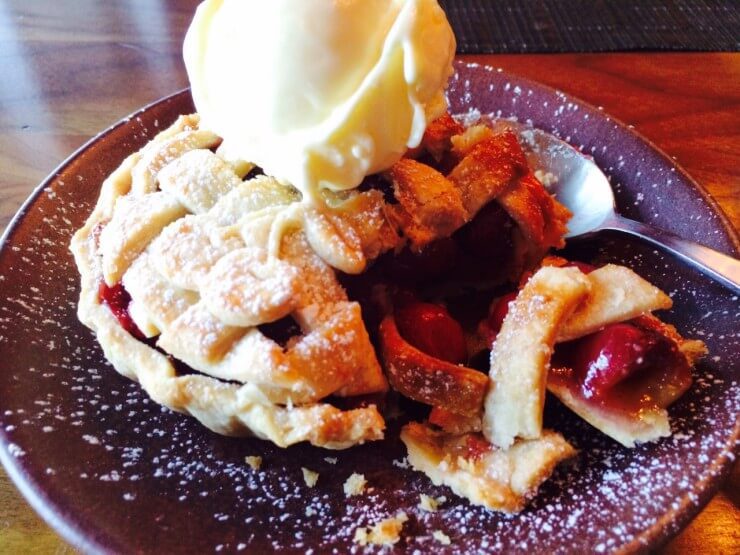