In early September we reached out to John Boy to place our annual heritage turkey order, and he mentioned he was busier than usual because of the documentary that had just come out about his farm. He sent us the link to The Bullish Farmer. When we saw the trailer, we were surprised to learn it was a full-length film that had been making the rounds at various film festivals. We were eager to see it, but the only way to do so was to attend a current screening. Luckily we found one in Jersey City at the Golden Door Film Festival, which was going on last weekend. So herein is our review of the film!

It is no wonder John Boy has been asked twice to have a documentary made about his farm. He is quite the character himself with a brash no-nonsense attitude. The first time it didn’t pan out, but this time around the director, Ken Marsolais, was able to really capture the story of the man and his animals. It begins with 9/11. John was working on Wall Street at the time and lost his brother-in-law, and he was weighed down with grief. He also began to rethink his career. He spent that winter up at his childhood home in Westchester, and as the snow melted he began to raise some chickens and plant some vegetables on the property. Soon he had a full-fledged farm stand that was much loved by the community (including our Director of Sales and Marketing, John O’Mahoney, who lives nearby). He found the process of raising animals and growing produce therapeutic, but he also began to see it as a potential way of life. So he bought a property up in Pound Ridge, NY near the Adirondack Mountains.

He confesses in the film that he had really no idea what he was getting himself and his future wife and now family into. There were huge learning curves in managing the infrastructure and logistics that go with running a full scale farm. Even now after over a decade of experience, he claims every day is full of surprises and feels a bit like “jumping out of an airplane.” I think what the film does best is show what small family farmers go through from sourcing non-GMO feed for their animals to taking them to slaughter. John raises chickens, ducks, Berkshire pigs, cows, and heritage turkeys. He says he is amazed every day by the cows’ stature and stubborn nature. He has an emotional connection each of the pigs, and even sees the birds as social animals that should be given more credit.

Aside from farming, John Boy’s other occupation is speaking out to the government and corporations on behalf of family farms. He sends out a weekly newsletter to his customers detailing goings on at the farm but also with insights into current agricultural issues. He also advocates for GMO labeling, animal welfare regulations, and diverting government farm subsidies toward supporting small family farms. Such small farms he claims were once the backbone of America. They were integral parts of the community, and they fed our nation nutritious food. Big corporate agriculture is quickly dissolving that model and degrading our nation’s soil and the wellbeing of it’s citizens. It is only through the dedication of small family farms like John’s and the customers that support those farms, that we can fight back against this big ag model and plow a better field for generations to come.

To get your hands on some of John Boys fine meats (some of the best bacon around) check out his store in Westchester, The Outpost. He also attends a Saturday farmers market there in Bedford, NY. 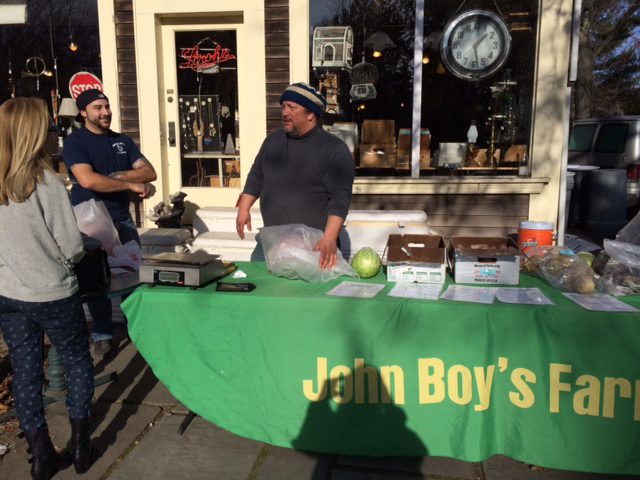