Over the past few weeks, the Greenmarket and the PRINT. kitchen have received an abundance of asparagus, a sure sign that spring is finally here. We are also trying to grow a little bit of asparagus in our rooftop garden. The conditions up there are a little challenging for asparagus plants which traditionally like wetter environments. It also takes a few seasons for an asparagus bed to establish itself. We are hopeful, and in the meantime we are enjoying the lacy green foliage of our plants and reveling in all the asparagus we are getting from local farms.

Did you know that asparagus is a member of the lily family? There are over three hundred species of asparagus, but the three most common types are green, white and purple. White asparagus is simply green asparagus that lacks green chlorophyll because it’s grown covered with soil – as the it grows dirt is continuously mounded around the stalk, depriving it of light. It’s a little sweeter and nuttier than the green variety. It’s popular in Europe, but not many farmers are growing it in our region. Purple asparagus is a different varietal altogether — it has a higher sugar content and is lower in fiber. The color is due to the same cancer-fighting phytochemical found in blueberries. A fun fact about asparagus: Roman emperors maintained special asparagus fleets to gather and carry the choicest spears to the empire.

One of the things that we love about asparagus is how versatile it is — you can steam, roast, grill, boil it — or serve it thinly-shaved and raw. Our favorite preparation at the moment is our asparagus flan served with fava greens, ramps, sautéed morels and a Parmesan crisp. It’s kind of like spring on a plate!

Below is an photo of asparagus in it’s infantile stage, that we planted on our rooftop garden, it take 3 years to start producing stalks, but after that the patch will keep producing for decades. 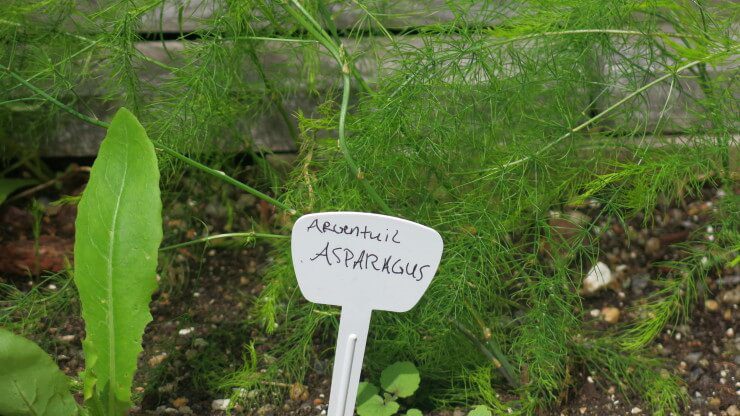