I recently went to visit the Brooklyn HQ of one of our newest purveyors for our cocktail program: Industry City Distillery. They have regular scheduled public tours and if you are interested at all in distilling, science, sustainability, or local foods, I highly recommend visiting these guys and seeing the cool things that they are up to. The whole place is like a mad scientist went industrial. They are creating new machines and new ways of distilling that are quicker, more energy efficient, zero-waste, and take up way less space than a traditional distiller. They make over 2000 bottles of beet sugar vodka in less space than most New York City apartments.

The five founders of Industry City Distillery — Zac Bruner, Max Hames, Dave Kyerejko, Peter Simon, and Rich Watts — were recently named to the Forbes 30 Under 30 list for the interesting and innovative work they are doing here. They’ve taken technologies from other industries and created brand-new distilling techniques. Since they are an urban distillery space, energy efficiency, and keeping a low waste foot print were paramount concerns. They settled on sugar beets as the base for their vodka,so they wouldn’t have to bring in grain, malt it, and dispose of the waste. They grow their own yeast in-house using a yeast propagator. The resulting yeast gets whirled in a centrifuge and then mixed with alginate to create yeast beads.

Instead of fermenting alcohol in giant vats, the yeast beads go into a fairly tiny immobilized cell bioreactor, where a mixture of beet sugar and water passes through them. Fermentation takes only 24 hours. And while traditional distilleries separate out what they call the “heads, hearts, and tails,” keeping only the heart for the finished product, at Industry City Distilling, they instead take 30 fractions, which they say allows for more consistency, precise blending, and eliminates the need for filtering at the end. This process also means that there is less waste. Instead of throwing away the heads and tails, Industry City Distilling only has to get rid of a small amount of alcohol from  each run, and even that doesn’t go to waste — anything deemed not good enough to bottle and sell, gets recycled as solvent in the shop. 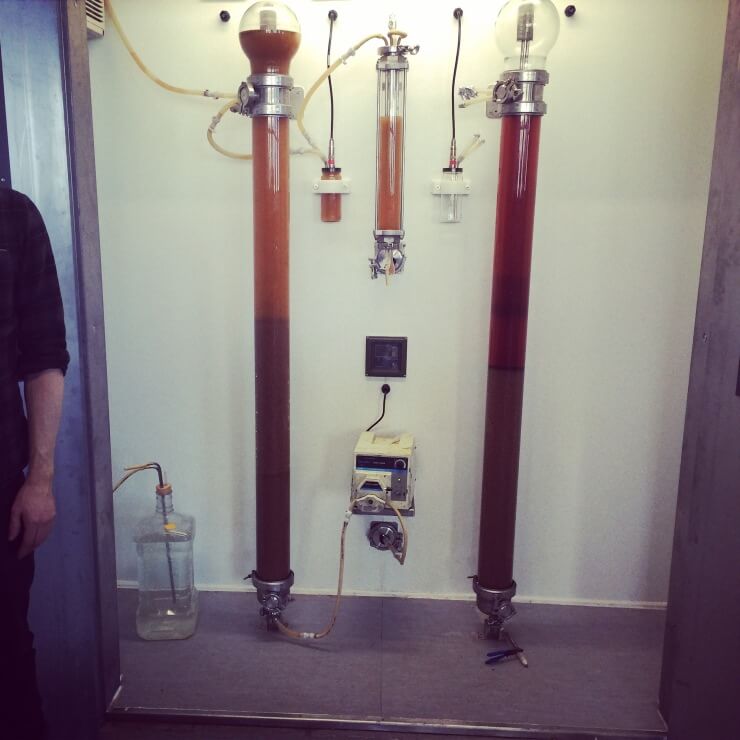 Another product from Industry City Distilling that I’m pretty excited about is The Technical Reserve. It’s  a 191.2 proof spirit designed and distilled for creating bitters, tinctures, and other cocktail potions. It makes for clean quick infusions, and I’m experimenting with at it Print and Press Lounge. I brought the guys at the distillery some of our wormwood from our rooftop garden and I’m excited to play around with it here as well. We can make our own version of absinthe, our own Ouzo with fresh fennel seeds, Limoncello with Meyer Lemons, etc. The possibilities seem endless right now.

← Housemade: Sweet on Bitters
New Year’s Eve at PRINT. and The Press Lounge →