At first, it was difficult to gauge if this farm trip to the Catskills would end up feeling like the coming of spring or the final farewell from winter. With forecasts for a nor’easter we thought we may end up sledding instead of foraging. We dodged the snow, but not the cold temperatures which dipped into the 20s at night. It wasn’t until we visited our first maple syrup producer that we learned this dip in temperatures was a good thing for the sap flow. The week prior with balmy 60-degree days had brought the buds out on the trees, and that leads to sour-tasting sap that is unfit for production. The recent cold snap helped to restore the clean-tasting sap they needed to cook down into syrup. It was fascinating to see the entire process: the tap set up, the reducing, the filtering, bottling, and grading. The trees do a lot of grunt work but there is still a lot of human labor involved in the process. It is easy to comprehend why real maple syrup tastes so delicious and demands such premium price points.

Our first stop was to Tree Juice, where according to their website, “the Fairbairn family have been making maple syrup on their farm since the 1930s. Beginning in 1998, they amped up production and built a wood shed and sap house, installed thousands of feet of sap line and 460 taps. After a hiatus of 5 years, Jake Fairbairn and his friend Ryan Annetts cleaned up the sap house and created ‘Tree Juice Maple Syrup’ in 2012. Remaining on the same family-owned land, Tree Juice Maple Syrup has now expanded its production and installed a total of 1200 taps. They begin tapping trees in mid-February and by the end of March are pulling them out. The maple sap travels down hill to the sap house, where it is filtered, sterilized by a UV light and then boiled in our 3.5′ x 10′ wood fired evaporator. They typically burn around 12 cords of wood (which comes from the farm, and helps manage a healthy forest). It typically takes 40 gallons of maple sap to become one gallon of Tree Juice Maple Syrup.” 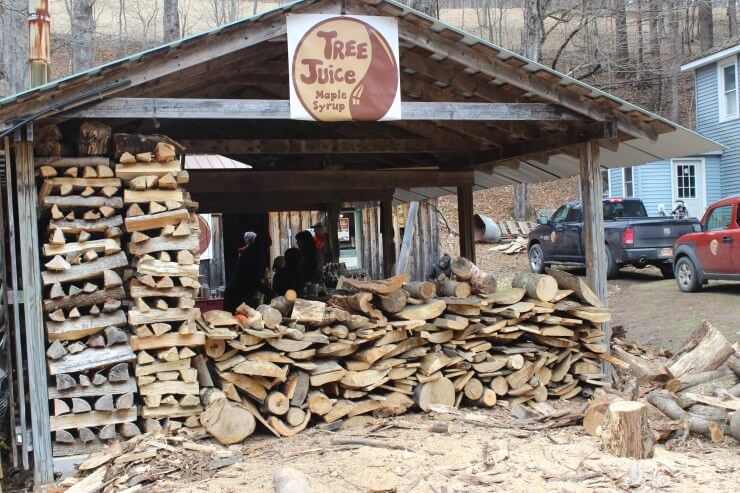 Since they use all wood fire to cook down their maple sap, the smell emanating around the sugar shack is intoxicating – a woodsy sweet perfume. They also have tried some creative aging and flavoring methods with their maple, placing it in bourbon barrels for several months which results in a nutty and complex syrup perfect for cocktails. At the PRINT. bar we are featuring it in a Maple Old Fashioned with Taconic Distillery Bourbon and citrus. They also have a vanilla-infused version perfect for baking applications like this Quebecois Pudding De Chomeur, which we made for dessert that night back at the farm. Below is part of the pastry team sampling the varieties along with incredible rustic maple apple pork sausage (which we most definitely put on a biscuit sandwich the next morning). They sent us off with a bottle of fresh maple sap, which hydrated and revived us and cleared our palates. 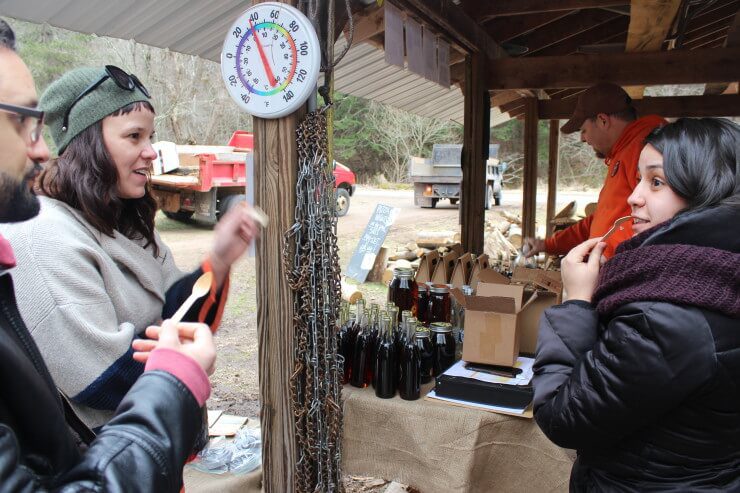 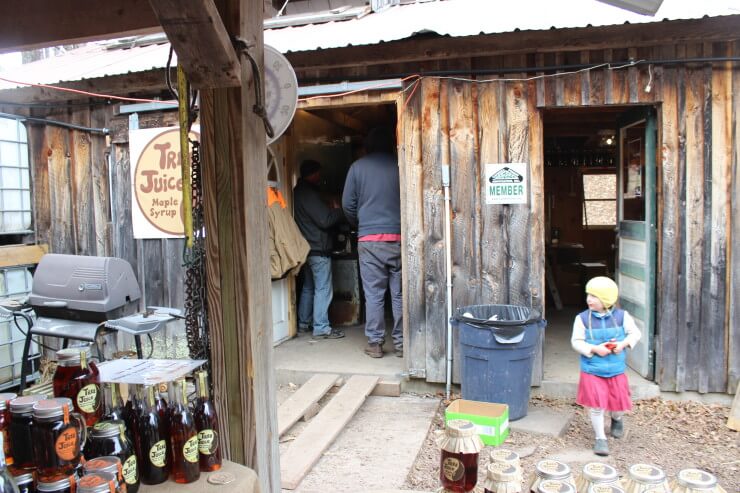 At our next maple property, we got to see the syrup being made on a larger scale with more large format equipment. Located up on a winding mountain road we had this view of the hundreds of acres of maple trees with an elaborate system of taps running through them. 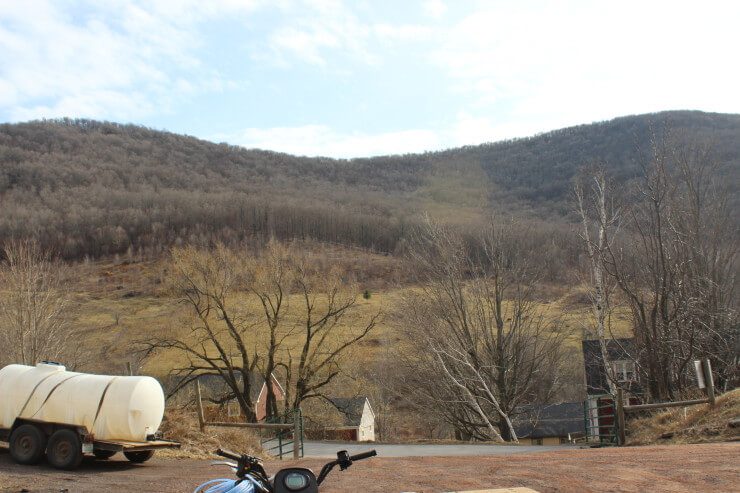 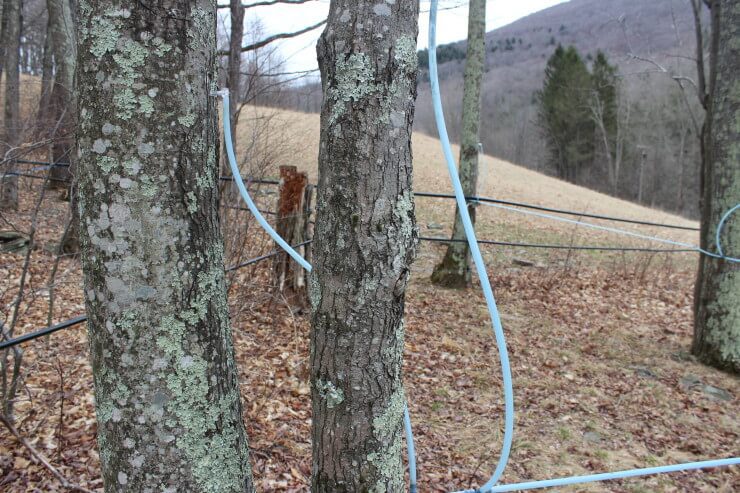 Joe, one of the owners gave us a thorough tour and even let us climb up and look into the vats. 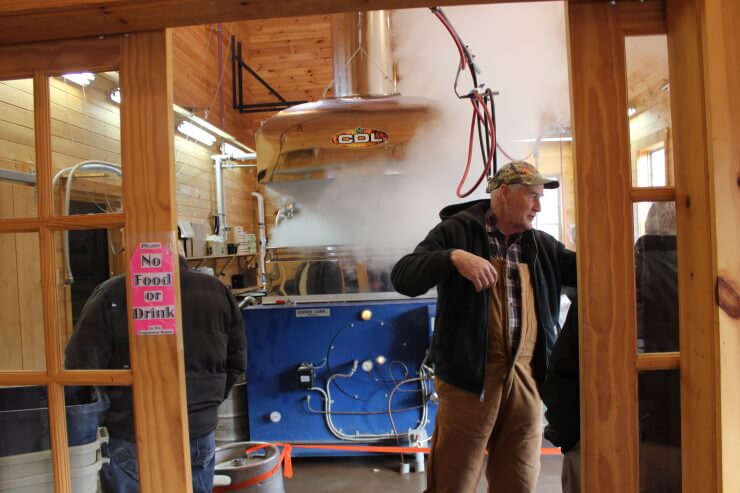 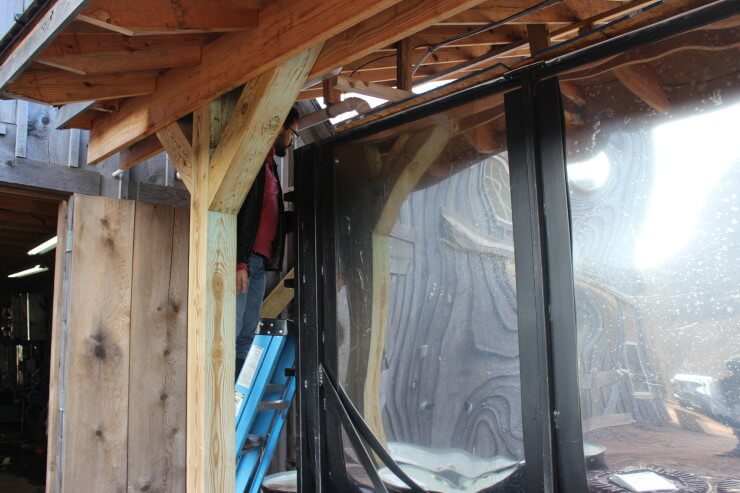 We admired the newly constructed sugar shack, which his wife helped design and construct (he said she nailed together the doors with one arm, one tough cookie) here she is below stirring the vat or syrup. We were lucky enough to get a taste, straight out of the compressor. The unfiltered, piping hot syrup had an intense woodsy flavor I had never tasted before in maple syrup which made us wonder if there could be a market for unfiltered maple like there is for raw honey. 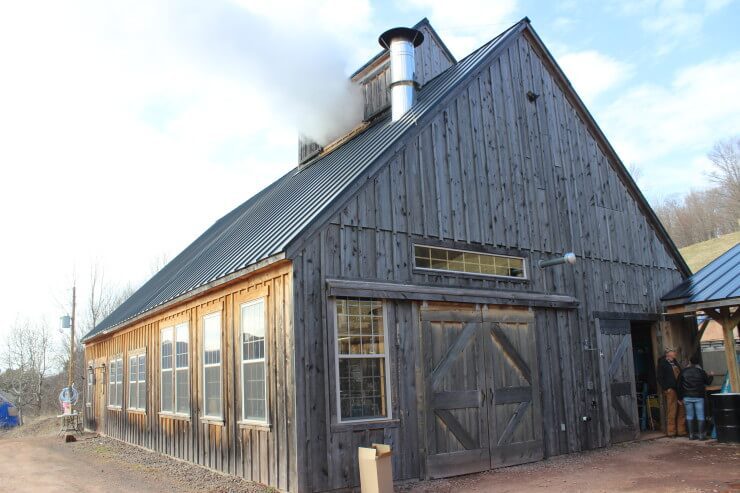 We also learned that the grades of maple are dedicated by the color and how the light shines through it. The maple sap from earlier in the season tends to produce the lighter delicate A grades while the later season sap producers darker molasses-y B-grade syrup. 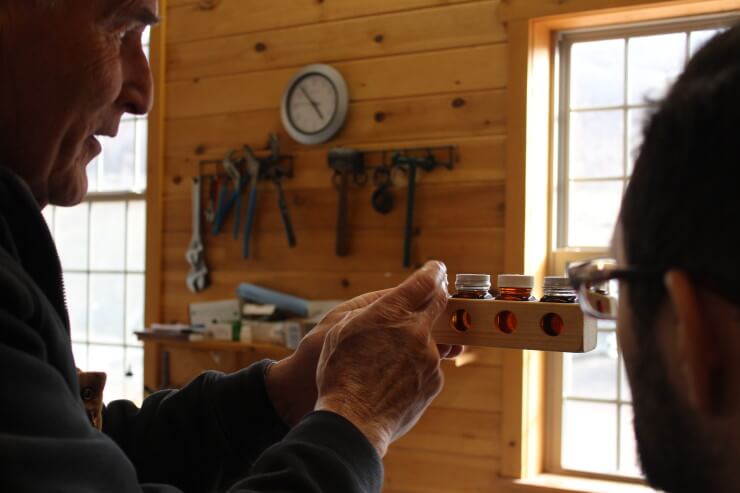 Maple syrup is high in sugar content and carbohydrates, but compared to other natural sweeteners it is rich in minerals and has added health benefits listed on the sign below. 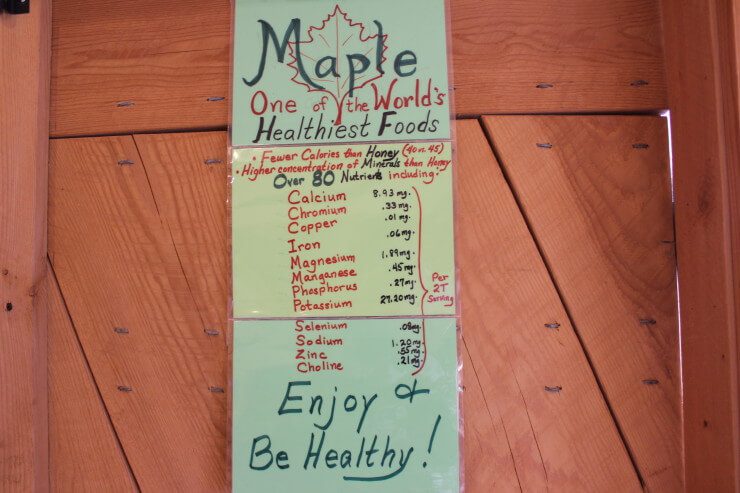 After a long day of syrup romping in the Catskill cold we were ready to head back to the farm to prepare a restorative maple hot toddy and hearty dinner. After all, we needed to regain energy for our farm chores the next day….to hear about our adventures at Straight Out of the Ground Farm, with pregnant cows, chicken coop reconstruction, seed planting and wild ramp foraging continue on to our next post…..