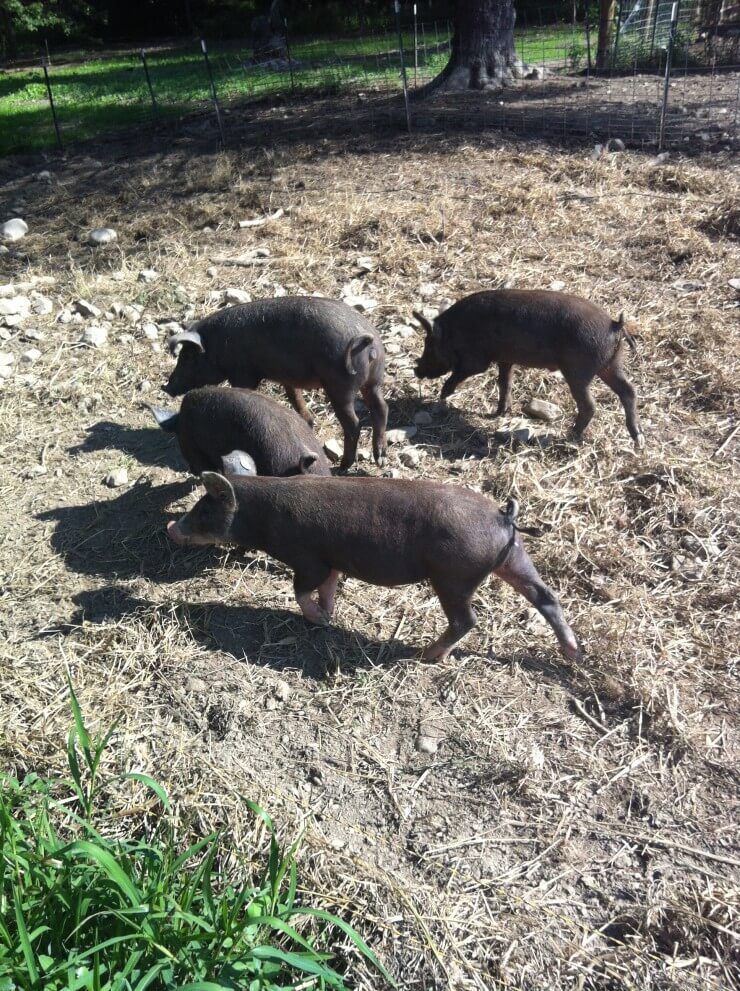 Some may think of a prime rib roast or ham for a celebratory Christmas roast, but here in the PRINT. kitchen our festive protein of choice by far and away is suckling pig. We are not alone in our love of the tender meat and crackly skin; around the globe various cultures celebrate occasions with this unique dish. In Spanish-speaking countries it is known as lechon, with reference to the young animals strict milk-fed diet and cooking method on a spit over a fire. In Germany and Austria it is known as spanferkel, and is slow roasted in the oven and enjoyed during Oktoberfest and Christmas. Amongst various Asian cultures suckling pig is served at both weddings and birth celebrations.

Here in the PRINT. kitchen we rub the pigs down with a mix of savory herbs and spices, and then slow roast them in the oven and serve it along side roasted Japanese sweet potatoes, grilled chicory, and a chimichurri sauce.

This year we are sourcing the piglets from Royalton Farms, located in northern Vermont. They take great pride in raising heritage breeds on their farm.  Along with the Berkshire pigs they are one of the few farms on the east coast to raise Waygu beef. A definition and history of the Berkshire pork breed is on the farm’s website:

Berkshire pork, known as “Kurobuta” or “black pig” in Japan, is said to be England’s oldest pig breed. It was initially bred in the English county of Berkshire (today known as Oxfordshire due to a change in county boundaries in 1974). Berkshire pigs today are descended from the herd maintained by the British monarchs since the early 18th century.

It is believed that the meat became popular in other parts of England after it was discovered by Cromwell’s troops while stationed in Reading during the English Civil War. The pigs were transported to the United States in 1823, where they were quickly introduced to the general hog population. The juiciness, flavor, tenderness, heavy intramuscular marbling and high fat content characteristic of pure Berkshire pork significantly improved the quality of meat when crossed with the common stock found in the United States.

Today, the purity of the breed is monitored by the American Berkshire Association, which registers Berkshire pigs that are 100% Berkshire and have a pedigree that can be traced back to those original English pigs. It is widely regarded as the Kobe beef of the pork industry. Each of our pigs has lineage traceable back to the pigs bred by the 18th century English monarchy and is registered with the American Berkshire Association.

Beyond raising heritage breeds, Royalton Farms take care to raise their animals sustainably and humanely with a focus on biodiversity and land stewardship as is summed up in this statement from their website:

We believe producing quality meat can only be achieved if we produce superb crops, manage pastures for optimum nutrition, and maintain all farm buildings to ensure animals comfort and health.

Our animals are unique for a myriad of reasons. Obviously our Wagyu and Berkshire Pork have unique traits that we highlight elsewhere, but we also have other animals at our farms. These additional animals all serve the same overall purpose: to create a physical environment that supports sustainability and enhances the farming experience for our animals and ourselves. We have oxen to plow our pastures and reduce the need for tractors which can damage valuable grazing crops. We have chickens, ducks and turkeys to add nitrogen to our pastures. We have goats to help clean up pasture areas that have been abandoned and need a few years to become productive pasture lands for our cattle. We raise bees and produce honey, but the process of honeymaking also promotes greater diversity in our pastures. All of these animals help support our overall goal which is to create quality meats in a sustainable manner. Plus, we enjoy taking care of each and every one.

Care is taken at every level from the farming, to the sourcing, to the preparation of these suckling pigs in order to create an incredible Christmas feast that should be truly savored.