After a five hour journey across several state lines, we pulled up to a charming Victorian home with a wraparound porch and a ice bucket holding a chilled bottle of reisling. The horses and buggies of neighboring Mennonite farmers clopped past on the street, making it truly feel like we had transcended to another time and place. We were still in New York state, but specifically we were in Penn Yan (abbreviated from original name Pennsylvania Yankees) located in the western stretch of New York’s Finger Lakes. Myself and a couple of other wine buyers were invited by Ravines Vineyard Owners to come take a closer look at the region, its terroir, and their unique approach to making remarkable wines there.

To get a deeper understanding of Ravines Wines we must first get to know it’s wine maker. Morten Hallgren, was originally born in Denmark but grew up on a vineyard in Provence, studied Oneolgy in Montpellier and made some of his first wines in Bordeaux’s Medoc region. Needless to say he had a very classic French winemaking background. All of that changed when he took on making wine in West Texas and learned to make great wines in a drastically hot and dry climate. Then he moved to the slightly less extreme terroir of Asheville North Carolina. Due to his unique classic wine making background combined with his knowledge working in new terroir, it is no surprise then that he was recruited by Dr. Willy Frank to come to the Finger Lakes. After six years of working on Dr. Konstantin Frank on Keuka Lake, they moved around the lake to purchase a property and go at it on their own. As detailed on their website, “In 2000 the Hallgrens purchased a 17-acre parcel of land on a glacier-carved hillside on the eastern slopes of Keuka Lake. This land is located at the widest part of the lake which allows grapevines to receive maximum benefit from its temperature-moderating effects, it has a good slope which keeps the mineral rich soils well-drained, and is situated between two deep ravines, which drain cold air from the land during the winter. These ravines are the namesake of the winery.” 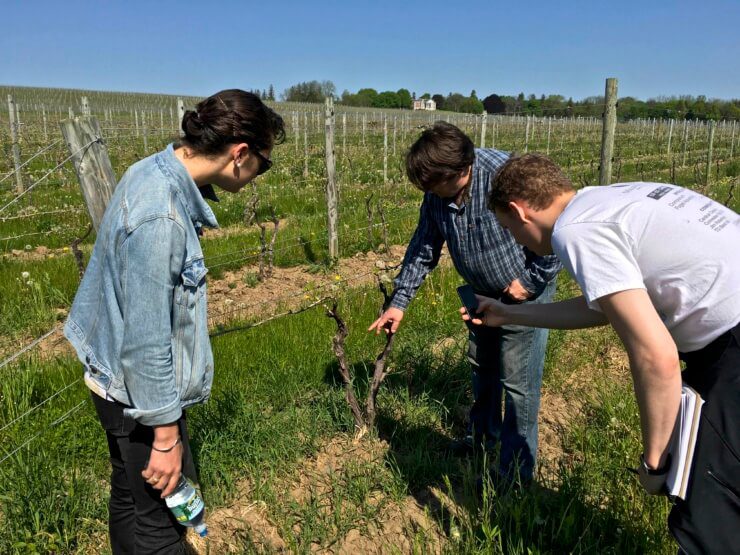 Morten’s passion for making wine in this region was on display in his wine cellar. Located in the basement of his home, it was a trove of dusty bottles, beginning from their first harvest in 2002. He is trying to figure out the age ability of these wines. We were able to join him and while relaxing on the front porch with a cheese plate, we sipped riesling from 2007, and chardonnay from 2008. Then, he brought out a sparkling riesling from a vintage when the grapes were not right for making into wine. He explained the haphazard, drastic nature of the weather patterns in the region often dictate the nature of each vintage, and they can vary intensely. Since in the Finger Lakes they have had a late start for the vines to blossom, that means they have a late harvest, often pushing into November. So at any moment there can be severe frosts which alter the harvest timing and methods. Generally speaking, as a winemaker he must be very adaptable. His approach is unique, in that he does not try to make exact replicas of his wines each time, he allows the weather to express itself in the wine. After cheese we moved onto steaks and twice-baked potatoes, made by Morten’s wife and business partner Lisa, who also operates the kitchen at the tasting room. With this lovely supper we moved into an older vintage chardonnay which was incredible and had beautiful waxy characteristics of those from the Jura. Also we tried a pinot noir from the early 2000’s that was still bright but with elegant dried fruit undertones. And of course with a steak there must be Meritage, so we rounded out the tasting/dinner with their version an elegant blend that spends 10 months in barrel and several years in bottle before its release. All in all it was a stellar tasting experience and great introduction to Ravines wines and their aging capabilities. The next day we would see the vineyard sites, winemaking facility, and even do some blending of riesling.

A visit to the winery begins with a frolicking with the miniature donkeys who grace the vineyard with their presence. Lisa, a big time animal lover, had asked for them as a birthday present, and although they are still trying to figure out a role for them in wine making (hauling grapes perhaps) for now they do a good job of eating weeds and contributing to the compost pile. Then we went for a tour with Morten, where we learned about the winemaking methods and their unique vine trellising format. And we finished with a blending session, where we got to taste the different riesling plots and clones. It was incredible to see how different they were. The first tank from one site was very austere and citrusy, the second had intense pineapple aromas and a touch of residual sugar, and the last held persistent mineral character and classic white peach notes. When they all come together you really get the interplay of each element and a cohesive riesling. We wrapped up in the barrel room, and pulled some incredible bläufrankisch which will stay in barrel a while longer and also a single vineyard cabernet sauvignon which is usually blended into the Meritage, but had intense character and structure all its own. 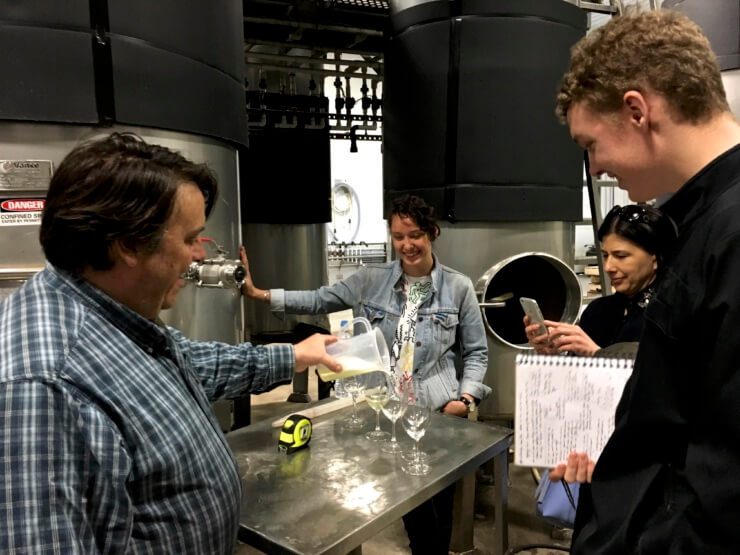 After all that morning tasting, we were ready to put some solids in our systems. So off to the FLX Wienery we went! This roadside spot is like the Shake Shack of the Finger Lakes, but a lot better. Weisswurst-style sausages famous to the region can be topped with everything from a fried egg to kimchi. The onion rings cut extremely thin and breaded in buckwheat spiced batter were heavenly and unlike any I have ever tasted. Poutine-style fries can be doused with foie gras and truffle salt and the cheese curds that go into them can be had on their lonesome deep fried in lard. And to go with or cut through some of these indulgences are of course Finger Lakes wines, some of which are made by the Wienery’s manager.

After all of that we basically rolled ourselves down the road to Weimer Vineyard, where Clara our guide and Ravines sales rep, had once worked in winemaking for several years. We had an incredible tasting and learned more about the regions terroir with the map/chart in the image below. Weimer’s wines are much more German in style and even their drier riesling has more residual sugar that lingers. In the vineyards they are using biodynamic methods and natural winemaking techniques in the cellar in hopes to allow the terroir and the grapes to show their true character. 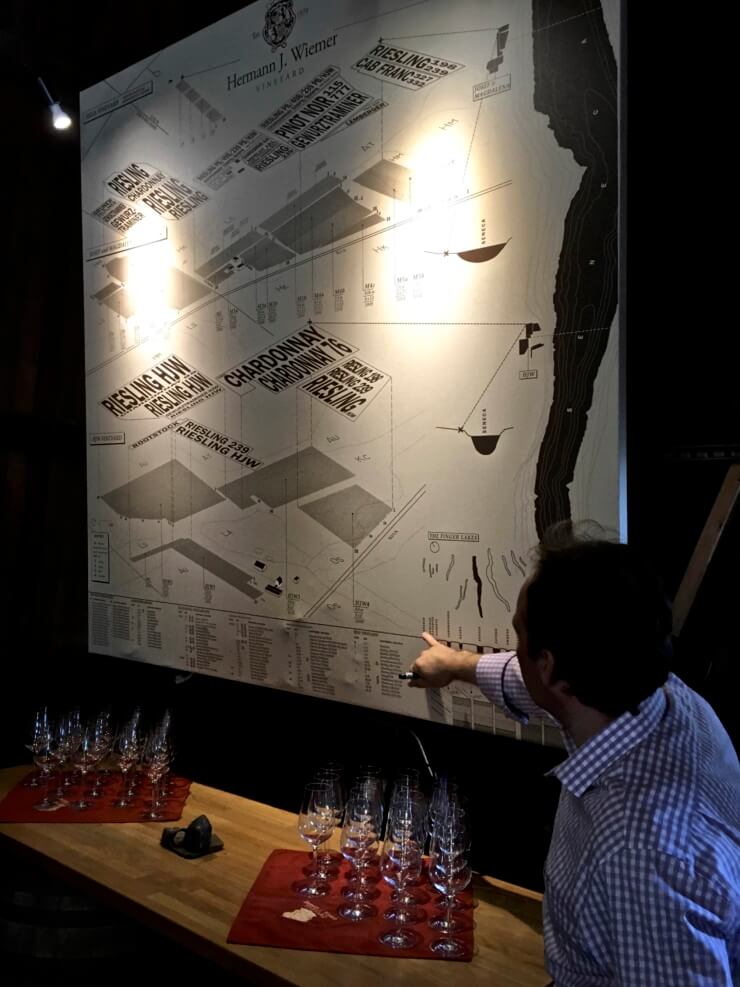 We took a break from tasting to take a small hike through, you guessed it, a ravine! Within a few minutes we were walking alongside a cascading waterfall. It was stunningly beautiful and made you appreciate the beauty that erosion can bring.

Our last vineyard stop was to a special single vineyard site on the southeast side of Keuka Lake, called Artgetsinger. These are the steep slopes with limestone soils, that lend stunning character to the riesling and the pinot noir grown there. In that sense it made sense to finish our tour here, at this unique site which produced some of Ravine’s most prized wines. As the sun began to set across the lake, it was peaceful just to be there and have a glimpse.

However, we couldn’t go to the Finger Lakes and not get out on the water, so Morten and Lisa graciously took us out on their boat and we traversed Keuka, while the sunset and stars came out, sipping out last sips of riesling, soaking in the last sips of this gorgeous region. 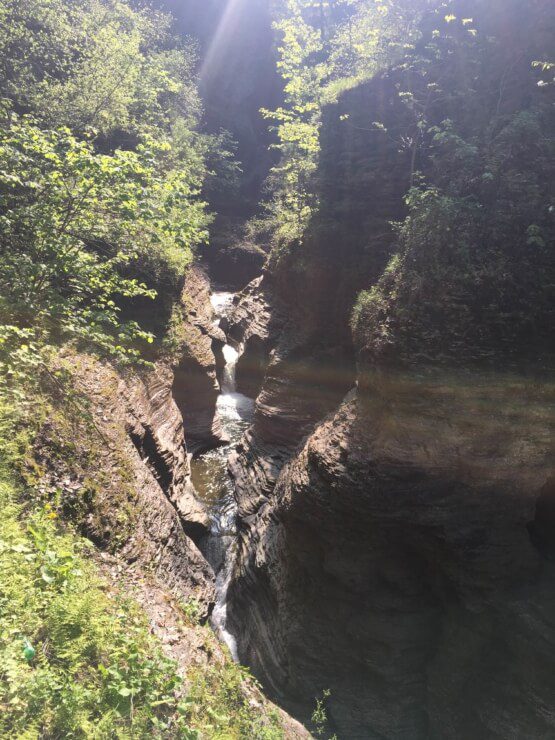