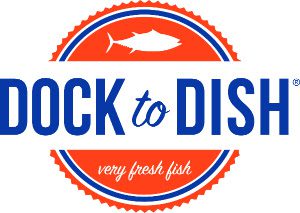 This week is Sustainable Seafood Week with restaurants in NYC, Seattle, San Francisco, and Washington D.C. taking part in educational events and special menus. While every day is about sustainability at PRINT., we are pleased to be taking part in this great event, and it also gives us a chance to talk about one of our newest relationships in the PRINT. kitchen.

We are excited to announce that we are now working with Dock to Dish. Based in Montauk, Dock to Dish is an exciting new model in sustainable seafood sourcing for restaurants (and some lucky consumers.) It is essentially a “CSA for fish” as founder Sean Barrett explained to us during a staff training session last week. Sean grew up fishing in Montauk and had long despaired of the current industrial fishery model, which has many layers and very little accountability or transparency. In the industrial system, the catch starts with the fisher, then goes to a buyer/processor to a freight handler/importer to an auction/wholesaler to another freight handler then to the restaurant or consumer. Not only does this make traceability difficult, this complicated system is low value and broken for small fishers, including family businesses that have been fishing in our region for generations. While on a trip to San Sebastian, Sean was struck by the sight of fishermen coming right off their boats with their catch and going straight to restaurants. “I was watching the fishermen unload their catch, stuff it into ice-filled worn wicker baskets, and stroll into the restaurants,” he says. “As they left, empty-handed, the waiters were already scribbling the names of the fish on the boards. Suddenly it hit me, why can’t we do this at home?”

Several years later, that experience helped inspire the launch of Dock to Dish in Montauk, first as a community-supported fishery, then as a restaurant-supported fishery as well. We are proud to be one of only 10 restaurants in the city to be part of this groundbreaking program, which shares our commitments to sustainability and supporting local purveyors. Dock to Dish creates direct relationships, eliminates waste from bi-catch and over-fishing, and supports the work of local fisherman while providing us with fresh delicious fish, that comes into our kitchen within 24 hours of when it left the water.

The catch? We aren’t ordering a particular fish. We commit to an amount of fish, and Dock to Dish brings us what is literally, the catch of the day, which means that we don’t know until the night before what we will be cooking. The night before delivery we get an alert telling us about the catch, and who exactly caught it. It’s a fabulous way to stay sustainable and have a direct connection to the product, season, and fisherman, but it’s also a little rush of adrenaline to have to create the menu on the spot. Fortunately that is something that Chef Charles Rodriguez and the PRINT. team excel at, and fits right into our ever changing menus. The first week was Golden Tilefish, which Chef Charles transformed into the beautiful dish: Seared Golden Tilefish, Shaved Fennel, Cucumber, Walnuts, Dates, and Balsamic. 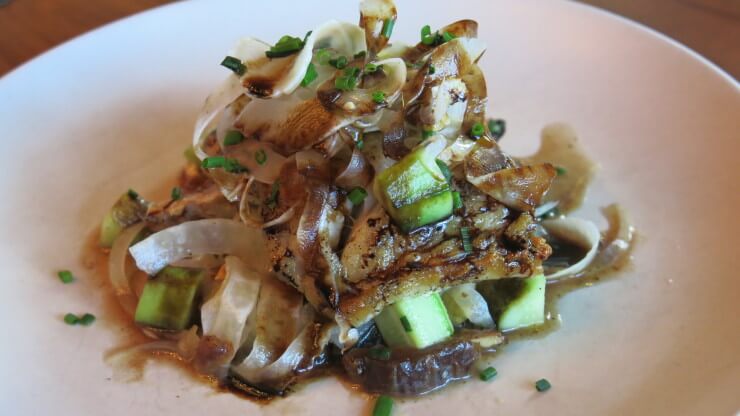 Week two brought us trap-caught Black Sea Bass caught under the supervision of Captain Eben Ball. We are also getting Large Montauk Sea Bream, caught Captain Terry Wallace fishing aboard the F/V Night Moves. You may be familiar with Montauk Sea Bream (Stenotomus chrysops) by one of it’s other names — maiden, fair maid, ironside, scup, pins, pinfish, porgy, pogee and bream. It’s an abundant and often underutilized fish in our area. At PRINT. we seared it with sautéed asparagus, scallions, favas, and rhubarb with a sunchoke purée and morel mushroom sauce. 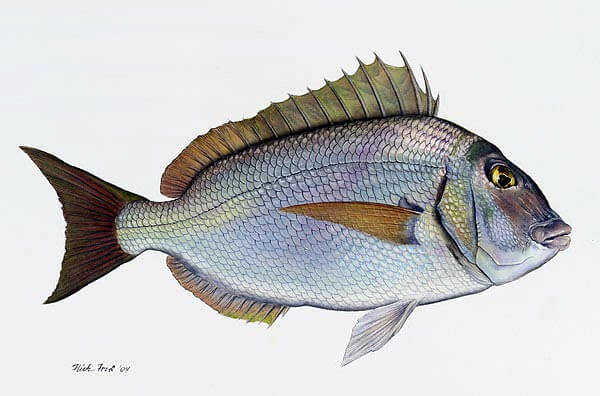