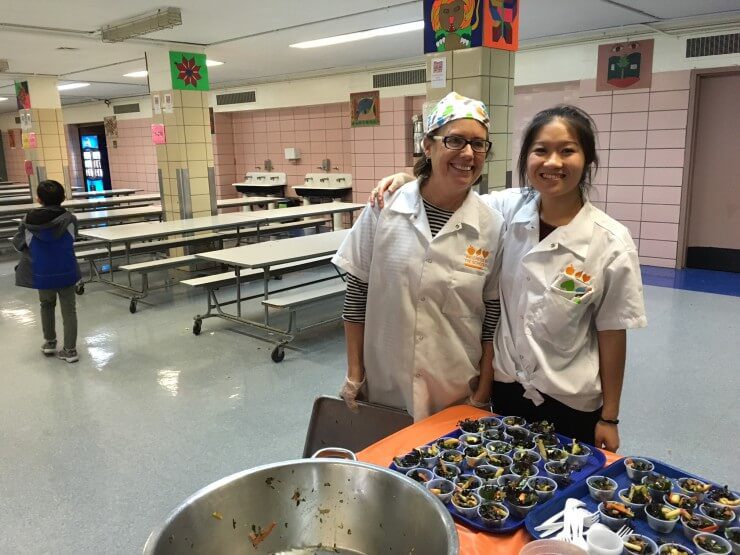 Cafe Days are apart of our partnership with Wellness in the Schools and PS20. We go in during the lunch periods and hand out samples of new and healthy seasonal recipes to match particular themes.  Last year to go along with the Carrot Cooking Labs, we brought in purple carrot juice and during the Kale Labs we a brought our signature PRINT. Kale Salad, which was a hit. This year we had a unique theme – Zero Waste Cafe Day. Recently the school has been operating a full-time zero waste program in the cafeteria (composting and recycling nearly all lunch waste) and wanted to celebrate it this week to show the students the impact they are making.

We decided that to complement this concept, we should serve a “Zero Waste Salad” using all parts of the vegetables, including the stems, leaves, stalks, that normally get thrown away. The day before, I was inspired at the Greenmarket by giant stalks of purple kale (off of which we have been getting beautiful tiny kalettes or kale blossoms). The large kale leaves we chopped up for our salad, but we also used the kale ribs, which were peeled and then roasted with olive oil. The same went for the green cauliflower stalks and the ribs of their leaves. A Food Corps volunteer at PS20 told me that when her mother moved back to Israel to take care of her sick grandmother, she wanted to feed her a healing macrobiotic diet. She could not find kale there so instead she used broccoli and cauliflower leaves as a substitute. In the past year I have seen more farmers selling the leaves at the Greenmarket, and that then inspired a Broccoli Leaf Ragu from the NY Times recipes for health section (I tried it and it’s delicious).

Another often discarded part of a leafy green, is the rib of swiss chard. Since we get such beautiful rainbow chard we cannot bear to throw these beauties away, and so we pickle them for our charcuterie platter. I threw some of those in the salad and then used the pickling liquid which already contained some spices, sugar and vinegar, and emulsified it with olive oil. The result was a complex dressing that was easy to make and eliminated waste!

Rainbow carrot peels and leaves were also added. Apple peels were any easy addition and ended up being the kids overwhelming favorite scrap, of course. Spiced pumpkin seeds were another favorite adding crunchy texture.

The samples flew from the trays! Many wanted seconds but we had nearly 500 students to feed so that was not possible. So we wanted to share the recipe here for them and anyone else wanting to eliminate waste from their kitchen, especially in this busy holiday cooking season.

Pre heat oven to 375 degrees. Rip kale or greens from the ribs and set aside. Peel the ribs, cut into 1-inch pieces. Toss with 1 tablespoon olive oil and salt and pepper and roast on sheet pan for 6-8 minutes until golden and bit crispy. Meanwhile, chop cauliflower into 1/2 inch pieces. Peel the stalk and cut into 1/2 inch sticks. Toss both the florets and stem pieces with 1 tablespoon olive oil and salt and pepper and roast for 10-12 minutes. Toss pumpkin seeds with remaining 2 Tbs olive oil and smoked paprika and salt, roast for 8 minutes or until lightly browned and aromatic. Allow all roasted ingredients to cool. Meanwhile, peel carrots keeping outer peels and chopping 1/2 cup of the leaves (keep the rest to make pesto or put in stock). Peel apple, keeping peels and chopping the rest into batons. Chop the kale. Take out pickled vegetables.

Make dressing: Shake pickling liquid with honey, olive oil and salt and pepper in a jar or tupperware until emulsified.

Place all ingredients in a large bowl, toss with dressing, massaging the kale a bit to tenderize. Add salt and pepper to taste. Enjoy!

← A More Refined Spiced Rum for the Holidays
Turkey Talk →